Not long after I started RetroBattlestations I started contemplating spending an entire day using only a retro computer, even possibly lugging it to work and using it there as well as at home. The idea of seeing whether or not an old computer could still be usable in a modern world sounded somewhat interesting, at least to me. After all, as much as computers have changed in the last 40 years, they also haven't. I often find myself using knowledge I acquire from tinkering with these old machines in my day job as a software and hardware engineer working with modern Linux distros and the latest technology from Intel.

As my collection grows I'm presented with many choices for which computer I could try using for an entire day. In order to narrow it down I've given a lot of thought to what capabilities would really be necessary. While I'm certainly no stranger to doing software development on a 40 column machine, I know less than 80 columns would be quite frustrating for me today. Some kind of hi-resolution graphics will also be needed since I'll also at least want the option to view pictures, even if transferring them over to the retro computer will be slow and painful. And of course it must have some means of connectivity, either serial, modem, or network. 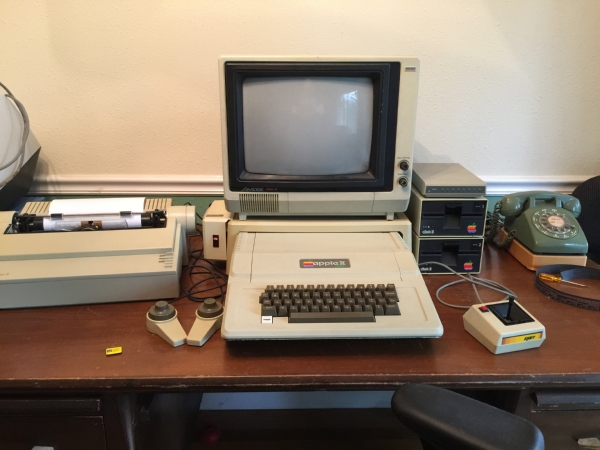 Since my souped up Apple II+ is starting to come together, it has become a viable option. Installed right now in the II+ are an 80 column card, mass storage using a Xebec SASI card originally used with Sider hard drives, a clock card, and a lowercase ROM. And of course it has the Kensington System Saver on the side. I also have a few other upgrades to play with like a Z80 card, a Mockingboard, an Echo II speech synthesizer, and a Legend 64k RAM card.

A question that arises for me though is am I trying to replicate the limitations of what was available in the '80s, or am I trying to create a scenario where I never upgraded past the II+ but modern technologies are available?

An example would be the modem: Currently I use a 1200 baud modem and I've been pretty happy with it since it's so much faster than a 300 baud modem. But for the retro computer day I considered borrowing the 2400 from the IIgs, but I don't really want to untangle it from there. Would using a "modern" 56k modem on the II+ be ok? If I'm trying to replicate limitations of the day, should I also setup a CRT TV and VCR and limit myself to watching TV that way when I need to take a break from the computer?

Because a lot of my requirements in choosing the old computer I'll use are based around being able to still do some of the things I do now, I think it's more about having stuck with an obsolete machine for too long. Some upgrades will be allowed, some won't, like using my iPhone so I can take pictures and post them. Using a ComputerEyes or a ThunderScan on the II+ might be possible, but requires things I don't currently have, and it would be tricky to convert the images from the II+ and post them on the internet.

Something else that has occurred to me is documentation. When fooling around with old software and hardware I often need to jump on the internet and go find a scanned manual in order to figure out how to get things to work. I have an idea of what things I'll want to play with during the day and I could go and get PDFs of the manuals in advance, but then what? I don't want to print them out, but I was also planning to avoid using the iPad. I'll guess I'll just have to see what happens.

I feel like I'm ready to give the Retro Computer Day a test run, so on Saturday, May 18th at 8am I'm going to turn off all my desktop computers and laptops (not just put them to sleep), however I will still use my iPhone to take pictures and share them. For the next 12 hours - or until I just can't take it anymore - the only computer I will use will be the Apple II+. Internet access will be through dialup to the FozzTexx Enterprises corporate timeshare computer. I may fool around with trying to use a ThunderScan to scan in pictures, but I don't have a Polaroid camera to take pictures with and don't want to purchase one. Since this is just an experiment I'm also not going to bother with setting up an old CRT TV, although the idea of doing something similar to what I did for the Saturday morning cartoons but making it show old sci-fi shows and movies like Whiz Kids and Tron is sort of appealing. Perhaps if this experiment goes well I can do it next time!