Saturday Morning Cartoons Aren't Gone, You Just Have to Know Where to Look

You're probably reading this because you saw the #SaturdayMorningCartoons Periscope broadcast I did and you're wondering how I did it when not only don't TV stations show cartoons anymore, how I managed to find three TV stations showing classic cartoons!

Some time ago I found an old Zenith CRT TV with knobs on it at a garage sale. There's no remote control on this kind of TV and the only inputs on it are separate VHF and UHF screw terminals. I thought having my retro battlestations use it as a monitor would look neat and be much more authentic than using an LCD screen, so I bought it. When I started doing the high score weekend challenges a few months ago I put the old TV on the bookcase next to the computers I was gaming on to do some short 30 second videos of the computers playing games while Saturday Morning Cartoons were being displayed on the TV.

It didn't feel authentic enough for me though having the TV only able to tune to one channel. I wanted to be able to jump around between stations by turning the knobs and hearing them click between stations with all the static in between while trying to find something to watch. I jumped on eBay wondering if there were devices that would broadcast on multiple channels and it didn't take long before I found ChannelPlus made several different modulators that could take four inputs and broadcast on four UHF channels. A Buy It Now and a few days later and I had a closed circuit ChannelPlus 5445 modulator.

#SaturdayMorningCartoons & commercials from the '60s! You vote on what we watch on a TV with knobs! https://t.co/XCB8kM2GRu

After it arrived I had to decide what channel numbers I wanted to use. I went through the list of channels in both Sacramento and the San Francisco Bay Area and selected four prime numbers (17, 23, 37, and 41) to be my channels that were not in use around me. Not because I was worried about interference - the modulator is connected directly to the TV through 75 ohm coax - but because I wanted to have my own TV channels. To provide the content for my TV stations I looked around my house for anything I had that output a composite video signal. The obvious choice was to use a Raspberry Pi because it's got more than enough power to handle real-time decoding of compressed HD video and has built-in composite video output. I used one Raspberry Pi for each channel: a Pi 2, a Pi B, and even an original 256MB Pi. 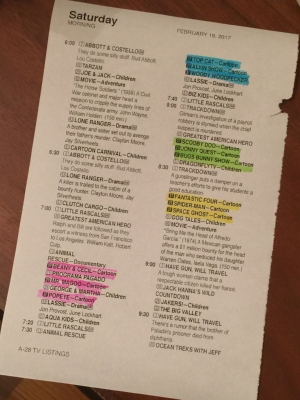 2 hours of Saturday morning cartoons! Now that I had my broadcast equipment the next thing to do was to decide what cartoons I was going to show and put together a schedule. I manually cobbled together a fake TV Guide style page composed of both real listings from Sacramento and listings for what my privately owned TV stations were going to broadcast, thinking that a photo of a page from a TV schedule listing Saturday morning cartoons might intrigue a lot of my followers.

With the show selection determined the next thing to do was work on chopping up the shows and inserting commercials. This probably would have been extremely difficult if not for the fact that I had already created a ton of video tools for ripping cartoons from DVD and chopping them up to add to my Plex server. Using my tools it wasn't too hard to split the episodes so I could insert commercials.

Even with the shows split up into separate video files it was still a very time consuming task to insert commercials and manage it all. As I started selecting commercials I was thinking that I would end up staying on one program for a full half hour so I put the same commercials into the shows that ran in the same time slot on each station. This reduced the effort a little, but each half hour block still required tweaking since each show had a different total runtime. I think this is something that could be done a lot better with some custom software to manage it, but I was scrambling to try to get something together late on a Friday night and didn't have time to try to write anything.

I put all the video files into their own folders and gave the cartoon files numeric names like 010, 020, 030, and inserted commercials in between by naming them 022, 023, and so on, similar to how we used to write BASIC programs so we could modify them without having to renumber. I hacked together a quick little shell script that would walk through the files in the folder having omxplayer play each one and queued up four "at" jobs on each Raspberry Pi to start the shows at the correct time. 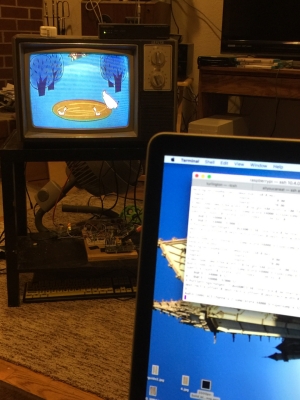 Controlling the broadcast through ssh Stayed up very late trying to get everything ready to go. Got everything tested as much as I could and left test patterns displaying on all the Raspberry Pis. As I went to bed I wondered how much was going to go wrong when I started up again live.

Just before 7AM I started the Periscope broadcast. I turned on the TV and flipped the channels and there were the test patterns I had left in place! And right at 7AM each TV channel started broadcasting the cartoons just like it was supposed to!

Things started off quiet with less than a dozen followers. Next thing I know my "art project" that I did just because I wanted to see the TV work like it used to is being flooded with viewers! I had become a featured broadcast on Periscope! I understand that featured broadcasts are hand picked so I have to say that was extremely unexpected and amost overwhelming! I got far more interest in my silly broadcast and all the viewers really kept things interesting with the questions they asked and the discussion they added. It was definitely worth all the effort I put in!

Of course not everything was perfect. I hadn't thoroughly tested pointing the iPhone at the TV and there was lots of flicker. Time slots got overrun. I thought I had left enough padding but it seems omxplayer takes longer than I thought to start each video. I probably also need to count how many videos I'm going to play into account. Some shows had been split into 5 files with several files for commercials; some were 10 or 11, plus commercials. It would have been nice to display a fake TV station ident still frame at the end of each show but I didn't have time to create them. I also should have put my own social media identity on a card taped next to the TV, I couldn't believe how many people were asking for my info so they could follow me on all the different sites!

Did you enjoy the broadcast? Should I do it again? Let me know in a comment below!