This Letter Quality Printer Is Now Fully Armed and Operational

This article is a followup to my previous article about trying to open and repair this typewriter. 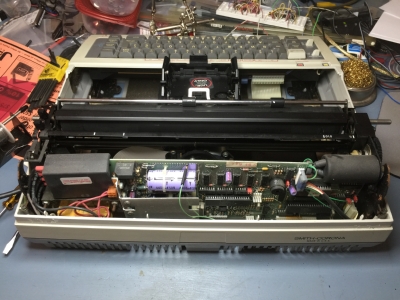 It's open! Bob Will didn’t have a service manual for my Smith Corona Memory Correct 400 Messenger but he did let me in on the secret to getting a mid ‘80s Smith Corona typewriter open: pry really hard. Yes really! Before you do that you want to remove the two screws near the platen. After taking out the screws the only thing holding the cover on is a couple of large metal posts that are held in place by some clips in the two corners. I had to pry a lot harder than I wanted to, but the cover did pop off without breaking the plastic. I do wonder if maybe there is a special tool for prying that cover off though.

With the typewriter open I was finally able to investigate why it wouldn’t power up. I was thinking maybe the power switch had been damaged while at Goodwill, but the problem was simpler than that, it was just a blown fuse. Goodwill told me it was working when they put it out, perhaps some kid had plugged it in and then prevented the carriage from moving, causing the fuse to pop?

I replaced the 1.25A slow blow (time delay) fuse with another, and sure enough, the typewriter was alive again! It powered right up and I was able to type away.

I connected up to the serial port and couldn’t get the typewriter to do anything. I thought perhaps I had to switch the keyboard into “off” mode, but that made no difference. Guessing that I probably didn’t have the baud rate right, I tried the parallel port next. Nothing.

Back to searching the internet for a manual and I had no results. But I did find an article that had been published in 1984 in Creative Computing. It mentioned a couple of escape codes, and described one of the dip switches, but also gave me the secret incantation to put the typewriter into printer mode: CODE P

Once I did that the LED on the Messenger Module lit up and the typewriter reset all its default margins. I was able to send some data of the parallel port and it printed. Success!

Being able to use the parallel port is nice, but I also wanted to know if the RS232 serial port worked. More searching for any bit of info and I saw an eBay auction with a Messenger Module for sale that had a bit of paper taped to the outside. It said that the factory settings were 1200 baud, 8 bits, no parity. I tried that but it didn’t work. Thinking that perhaps the previous owner of my Messenger Module had changed the settings, I tried other baud rates. At 19200 I got results and was able to print on it over serial!

Of course I also had to see if typing on the keyboard would send anything. As expected it doesn’t. Bummer. I’ve got half a TTY though! Perhaps writing new firmware would enable the typewriter to send keystrokes, but it may also require new firmware on the Messenger Module. I was considering throwing a logic analyzer on the DE9 on the typewriter to see if I can figure anything out, but I have yet to do so.

I’m still not entirely sure what I’m going to do with the typewriter, but I’m really happy that it finally works. I'm going to have to keep my eye out for more red ring daisy wheels so I can have more fonts. I originally thought it would be neat to get a white ribbon so that I could make it type on black paper to make Lite-Brite sheets, but that doesn’t seem like something that’s available. My other thought was to hook it to the BBS or Twitter but I don’t want to have it printing all the time or have to constantly be loading paper into it. It’d definitely have to be restricted to only printing urgent messages from the president. Or Batman.

And for anyone else that has a Smith Corona typewriter and Messenger Module, here’s the info I have on the escape codes and dip switches.