With the 4th of July coming up very quickly, I remembered I still needed to modify my mini-butane torch to include a flashlight of some kind. While the torch makes lighting a fuse quick and easy, finding the fuse in the dark was a bit of a problem.

I grabbed one of those mini touch-lights from the dollar store which had 3 white LEDs in it. I gutted it for one of the LEDs and hooked it to a CR2032 battery (the kind that motherboards use). The LED lit up nice and bright! The next step was to make some kind of switch and a rig to hold the LED and battery on the torch. 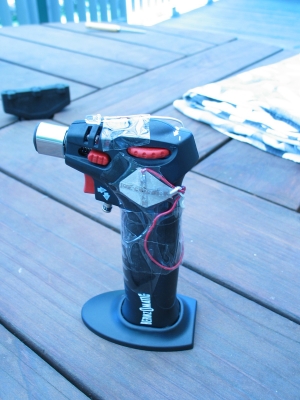 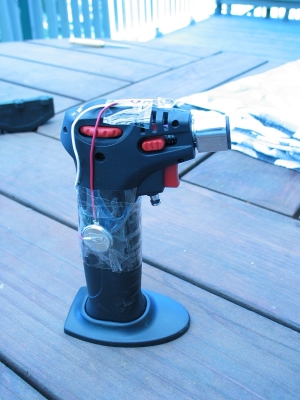 It may not be pretty but it's very effective. The switch is made from a couple of strips of metal (the breakoff strip from a row of crimp pins). I taped the strips in a "plus" pattern to a piece of cardboard, with the top one bent in a sort of arch over the bottom one. When I press it the top strip flattens out and makes contact with the bottom strip. For a battery holder I used a couple more of the strips on the ends of wire and first taped one to the side of the torch, then taped the battery and the other end over it all.

Now I can turn on the light with my thumb to see where the fuse is, then squeeze the trigger and light it!