Last week I decided I absolutely could not go another summer driving in the heat. After a quick trip down to the dealer at the end of the street to check out the Magnums, I started searching the internet for everything I needed to know before I bought a car. I found a really good site that talked about the whole process, suggested alternatives, and included some spreadsheets so you could do lots of calculations and comparisons.

I quickly discovered that a nice car wasn't out of reach like I had thought. It did however mean that I'm going to have to go back to "frugal living" for a while. No more splurging on video games, dog toys, or expensive frozen dinners from the grocery store.

I figured out which options were important, which weren't, and started sending out requests for quotes. I didn't really get much of a response, very underwhelming. One dealer did actually call, but all the sales guy wanted to do was sell me Charger. I don't want a Charger! He told me he'd check around and get back to me. He called back in 20 minutes - no doubt after simply wandering around his own lot - said they didn't have any, couldn't order any, and again asked did I want a Charger. NO! I already said I don't want a Charger!

The next day after more searching I found the car I wanted in dealer inventory, but it was a 3 hour drive away. I submitted some more requests through more sites, this time including a couple of sites that let you buy online, and waited. One of the online sites called me up, and I explained that I didn't quite understand what they thought the benefit of their site was. Their site printed a couple of numbers on my screen that didn't seem relevant, then dumped me on a dealer. The dealer of course hadn't even tried to contact me, plus I already knew they didn't have the car in stock. The rep on the phone told me I should try to get the dealer to make arrangements with another dealer and blah blah blah. Right! If he wants my business he can do the leg work himself.

A little while later the other online site calls me. The sales guy is very friendly, I go over the options I want, and he says he'll check around and see what he can find. He calls back pretty quick and tells me he found the car, and he's arranging with their dealer network to get the car to a place in Antioch. I told him I already had gotten a loan online and he felt he could beat it. He called back later after talking to their financing department and said they couldn't beat the rate that I got from Capital One Auto Finance.

The next morning the sales guy calls me to let me know the two dealers have come to an arrangement and that he'll be getting my car in on Friday or Saturday. But the dealer wasn't going to accept my financing from Capital One Auto Finance. Sigh. I knew this seemed too easy. He told me I could take the dealer's financing and then refinance in 3 months. While their rate was barely higher (it would have only cost a few hundred extra over the life of the loan), it was adding to the hassles and wasn't what I wanted to do. He called back a little while later and had been able to match the rate, and not only that, now the dealer was going to deliver the car to my home! And the delivery wasn't going to cost me a thing!

I was of course determined to buy a car on my own because I wanted it to be a shock to everyone I know. It was hard holding it in during my trip to Napa over the weekend. I wanted to relate all the troubles I had talking to dealers, but I had to keep it secret. Over the weekend I had even found a copy of the owner's manual and I was busy skimming through it to find out exactly how the toys on the car worked. I had to be careful to make sure my parents didn't see what was on my screen.

The other challenge while waiting was making sure Seven didn't have any skunk encounters. Yep, it's skunk season again. It would be really awful for him to get skunked and then not be able to let him in the car. Taking him out on a leash in the evening saved me. One night there were two baby skunks wandering around through the sprinklers, the next night there was a large adult over in the rose bushes in the corner.

Yesterday the big day for the delivery finally arrived. I still wasn't sure this deal was really going to happen. It had been too easy. Plus, I had been checking the original dealer's site every morning to see if the car I was getting had been removed from inventory. (As of today it's still listed, even though the car is in my garage.)

When Seven suddenly started barking I thought it was probably UPS, but when I looked out the window, there it was! My nice new car was sitting there in the driveway! 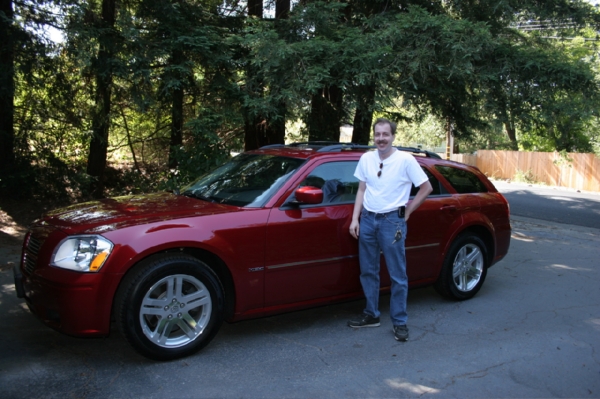