These things are HEAVY!

Picked up a Pepsi machine today. I can't believe how heavy it is. It weighs at least twice as much as an arcade or pinball, well over 500 pounds. This is as far as I could lug it by myself. I will have to wait for someone to come over to get it into the house. 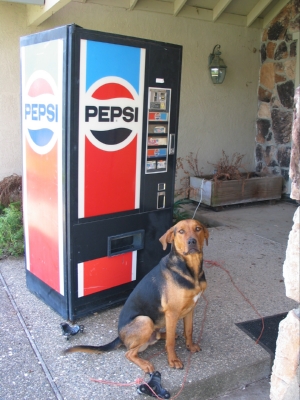 The only thing that I know that definitely works is the refrigerator. It gets quite cold. I can't get it to do anything else though. When I load cans they just fall right through. If I put in money, it spits it out, even if I hold in the switch that says it still has some cans left.

The model is a Vendo V264-148, which I believe means it will hold 264 cans. From what little info I found on the web, it seems to be nearly identical to another manufacturer, a Dixie-Narco 240. It's missing the cams and a rod for the two narrow trays, I'm not sure where I can get them to replace them yet. I saw a site that said I needed to "prime" the trays, but had no info on it. The site said "pictures coming soon" but I think the site was put up a couple of years ago. I've sent off some emails, hopefully I will get some help soon.

I also picked up one of these vending macines for a game room. I am having the same problem with it not accepting money. I have not looked at it too close yet but it appears to be in good shape. Please let me know if you found an easy fix..or a fix at all.

I didn't figure out how to make it take money, I just bypassed it so everything was free.