I got mine, did you get yours? I picked it up just a few minutes after midnight. Around 10pm I went over to see how many people were camped out in front of GameStop. Only about 5 people there. Plus a homeless guy that must have been quite drunk, he was trying to keep everyone entertained.

At 11 the store opened to let everyone in from the cold. They also served pizza and soda to anyone that wanted some. Of course everyone had to stand, except me that is. I had my little folding chair that I've had since middle school. Quite a few people commented on how neat the chair was.

Around 11:30 more people started showing up. Mostly high school kids, with a few parents I think planning to surprise their kids in the morning. I heard at least one parent say it was a surprise for Christmas, but it looked like she had her kids in tow!

By about 11:45 a line started forming by the counter, with those of us who had been camped outside up front in the order we were outside. The kid who was first in line said he had been at the store since 6am! I thought he was crazy since the store was only giving out the pre-orders so why wait all day? Turns out one of the people who had pre-ordered had cancelled, so the store had one Wii up for grabs, so that was what the kid had come for.

They also said they didn't have any extra Wii stuff at all. They only received a shipment of things for all of the pre-orders, and the store managers were under the impression that's the way it was everywhere. I don't know if that's true or not.

The homeless guy had been hanging around in the store (for the pizza of course), and about 11:50 he started counting down the minutes. Apparently though the store managers didn't understand that Nov 19th starts at 12:00am, and waited until 12:01 to officially start handing them out. I kinda thought they should have been handing them out at 9pm, after all it was 12:00am on the east coast then. 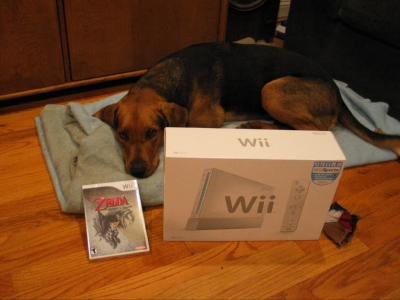 First disappointment: the package doesn't even include an s-video cable. It's only got composite! C'mon Nintendo, that's soooooooooooo last century! The next bummer, they decided to change the physical connector for the video cable to something new, so the s-video cable that works on my SNES, N64, and GC doesn't fit.

I'm definitely impressed with how well the 3D sensing works. It really seems to know just where the remote is. I was also surprised to discover that the nunchuk also has a 3D sensor in it. In the boxing game you control both hands and they both follow your real hands.

I also haven't found the virtual console yet. Maybe it's not ready? There's instructions for using it in the manual, I would have thought they would have it ready to go. Maybe it's there and I'm just not seeing it.

Ah well, time for some Zelda.