Sunday I decided to take my TV antenna down so I could replace the stripped, frayed, spliced 300-ohm cable. The antenna is on a 15 foot or so mast, but I thought I could probably manage by myself. I'm sure this whole stunt probably falls into the "you shouldn't try this yourself" category.

For some unknown reason, the people that put it up decided to tie the mast at 4 points instead of 3. The hinge at the base was also set to swing down between two of the points, instead of at one of them. This meant that I would have to undo the cable at 2 points. Of course, as soon as I undo one and let go to go over and do the other the whole mast would fall since it isn't supported. With a 3 cable system I could undo one and then walk over to the mast while continuing to hold that cable.

To deal with the problem I undid the cable at one point and then tied on some new cable to lengthen it and retied it at another point on the roof that would give me the 3-point tripod arrangement. Then I undid the second point and went back to the temporary tie-down and released it while hanging onto that cable. I kept the mast up as I walked toward it, then grabbed the mast and started to let it down slowly.

Unfortunately I discovered to my horror that base wasn't secured. As the mast came down and the center of gravity shifted behind me, the base lifted up from the roof and the antenna came smashing down. Fortunately the crash didn't bend it very much. I quickly grabbed the saw horse legs I had brought up and propped it up so it wouldn't continue to bend the antenna. 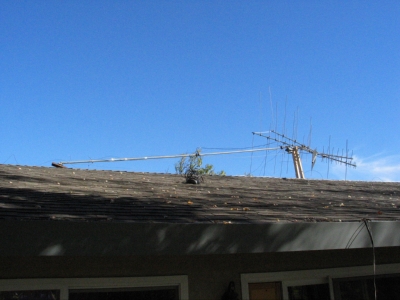 Antenna after it came down on my head Now that it was down I proceeded to unhook the 300-ohm cable and get the 75-ohm and transformer connected. The screws that held the 300-ohm on were rusted pretty solid. As I kept trying to undo them, the aluminum brackets that held them kept bending. I thought I was going to have to drill them out, but they eventually broke free and I took them out. In undoing all the 300-ohm cable from the mast they had really done everything wrong they could. The wire was tied to the metal standoffs with metal wire, no plastic spacers in the center of the standoff to hold it. Further down the mast they had simply duct-taped it to the mast. And to get in the house they actually pierced a hole in my metal gutters and stuffed it through instead of just looping it over the gutter.

With the 75-ohm cable now connected I wanted to get the antenna back up. The problem was how to secure the base without putting holes in the roof and with nothing to clamp it to. I tied a cable to the base and ran it across the roof, in the same direction that the mast was laying, and tied it down. The thought was that as I raised the antenna, the cable would keep the base from sliding away. I paused for a while before lifting the antenna to really think about if that was going to work or if it would crash down and bend some more. It was also starting to get pretty dark by now, and I decided my plan probably wasn't going to work, and I also had wire and cable all over the roof to easily tangle my feet in, so I gave up and left it for the night.

During the night I had given a lot of thought to how I was going to get the antenna back up by myself, and I was glad I hadn't tried with the base simply tied the way it was. The center of gravity would have shifted like it did before and the antenna would have crashed down. I had another idea, but I wasn't sure how well it would work.

Chatting with my friend Rob, I told him I had taken the antenna down and wasn't sure how I was going to get it back up by myself (hoping maybe he would volunteer to drive all the way over and help me, but it's far for him and he just got back from a long trip, so I wasn't going to ask). Since it seemed I was going to need more than one person, he suggested that I play the Elegy of Emptiness. Obviously that wasn't going to happen. Instead I decided to use another trick from Zelda: pushing blocks to stand on the buttons for me. 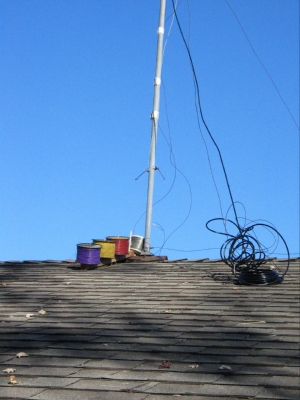 Antenna back up by using weights to keep the base secure For the "blocks" I used 7 nearly full rolls (at around 6 pounds each) from my collection of wire, with two of my shorter wire-hanging supports nailed together to lay over the antenna base. I wasn't sure the weight would be enough, but it worked and I was able to stand the antenna back up! So now you know, if you're in a situation where you need to do something and you only have yourself to rely on, think back to the lessons you've learned from playing the Legend of Zelda.