My cousin Dave sent me an email yesterday afternoon about Wii pre-orders at GameStop. I wasn't sure if I wanted to go over or not, but there's one very close to me next to the grocery store. Around 8:30 this morning I decided I'd go ahead and walk Seven over and see if there were any pre-orders left. I figured the store either opened at 8 and they'd be all gone, or it would open at 9 and the line would be so long that they'd run out anyway. But it's not far and Seven needed a walk so I grabbed my fold-up seat and headed over. Seven had also been sprayed by a skunk the previous 2 nights, so I thought maybe his stench might drive people away and I might get a spot that way.

When I got there only a couple of people were waiting around out front. Looking at the door I saw the store didn't open until 10! I debated whether it was worth showing up late for work, but I had time to kill anyway so I set up my stool behind the lady camped by the door and waited around. By 9 quite a line had formed behind me. Some people said they had been there since 6am, but were waiting in their vehicles until they saw the line forming. The line was made up of either nerds, or parents claiming they were there on their kids behalf.

During this whole time Seven was going nuts since there's a PetCo right next door. Each time some dog went by he had to howl and bark and shiver because he was so excited.

Around 9:30 the manager showed up and went inside, then came back out and asked if everyone was in line for the Wii pre-order. He walked down the line and handed everyone a little numbered certificate for the pre-order, I was number 2! I then tied up Seven to a column and tried to get back in line, but even though he could see me he wouldn't settle down so I had to wait over next to him until the store opened at 10. 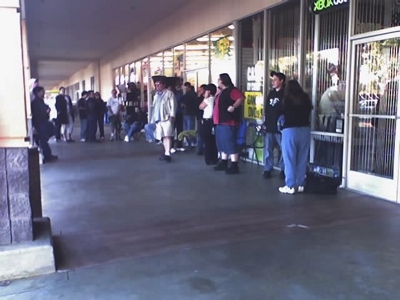 After the lady in front of me paid and was leaving, she asked where her number was on the receipt. The guy told her (wait for it) that on the release day, they would be handing them out on a first-come, first-serve basis. I had already commented on this standard EB Games tactic with some other people while waiting outside in line. In theory the store will set some aside that day and not sell them, but I have heard many times that the staff is not organized enough to keep track of the reserved ones, so if you don't show up early, you won't get one, pre-order or not.

No doubt I probably should have ordered (or pre-ordered) one on-line, or maybe even waited until the release day and picked one up at Target. I had been debating doing that hoping for a good bundle from Target since that's what I usually do, but in all the other cases the console had already been out for a year so they were doing bundles to try to sell some more. This is the first Nintendo that has a Zelda at the initial launch so I decided there was likely not going to be a special bundle.