Time for an episode of "Stupid Ways to Waste Time"

Yesterday I finally decided I needed to get rid of a bunch of old Macs that I took home to save from ending up in a recycler's scrap heap. They all worked so I have been resisting for years turning them in as junk since I figured there must be something they could still be used for. Most were 6100 series PPC Macs, and can run Linux and might be useful as Linux experimental test beds. 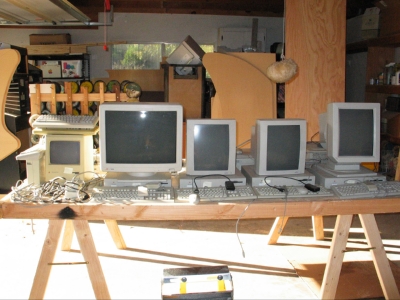 I knew I was probably never going to get around to installing Linux on them, and I have had them stacked on my utility cart since I brought them home. I could really use my utility cart back, so I setup a table in the garage and sorted through the pile to get an inventory and see how complete everything was (and to check if there was anything I really wanted to keep). I found I had a Mac Plus, 4 6100s, a 7200, a 6205, an LC II, and a IIci. I took a quick picture and posted the whole thing on Craigslist in the "free" section. I didn't really expect anyone to take anything, but it was an easy place to start before finding a place to recycle them.

It didn't take long before people were asking if they were still available. One guy claimed to be affiliated with the Boy Scouts and wanted to take them all because he could put them to good use. He of course never showed. Another guy was interested in a couple of the PPC Macs, as well as the Plus, but didn't seem to understand that he had to take it further than simply saying he was interested. He seemed to think the computers would magically materialize in his living room just by sending me an email.

By noon one guy had actually made it over and took the Plus away. I was actually quite surprised to see that be the first to go, I had thought it would be the hardest to get rid of. Unfortunately, as the day went on, it seemed that the Plus was going to be the only Mac that was going to be saved from the recycler.

Around 3pm I had the idea that maybe I could get rid of them if I turned them into arcade machines. No doubt this was going to be a stupid waste of time, but what the heck. I pulled one of the 6100s off the table and set it up on my utility cart with a 17" monochrome Radius Portrait monitor. I thought it might be neat to play some black & white vertical games on it. Plus the 21" color monitors are just too heavy to move around. I put my laptop on the cart and used it as a wireless ethernet bridge.

A little bit of searching revealed that I could still download a version of MAME old enough to run on MacOS 8.5. Of course finding the right file that actually would run wasn't easy. The first one I downloaded said it required 8.6. Well that's out, I'm not going to upgrade the OS. Another download and it didn't list any requirements, so I gave it a try and when it ran it complained it couldn't find "PowerMgrLib." More searching revealed that the 6100s don't have any kind of power manager which is why the library isn't there. But why the software even required it was beyond me.

Continuing on my quest, I tried an even older version of the emulator. This one launched and so the next thing was to get some ROMs loaded. I connected to the folder on my server that has lots of ROMs, and the poor Mac pretty much hung trying to sort and index the entire list before presenting it to me. Oops.

I rebooted the Mac, and this time I picked out ROMs one at a time on the server side, and placed them in a special folder that the Mac wouldn't choke on. I copied over Space Invaders, fired up MAME, checked the settings to try to get it to go fill the screen, and ran it. It worked!

Next I wanted to try something more popular, like Pac-Man. Digging through my ROMs I copied over everything that I thought might be related. Unfortunately none of the parts I found seemed to be complete. Either I didn't find all the parts, or the filenames in my newer ROMs weren't what this old version of MAME was expecting. I thought maybe if I tried some other really old game the ROM might be compatible, so I added Space Zap to the list.

Space Zap fired up, but sadly, it choked. Hard. And this is a very very simple game. Sound skipped and repeated, and the animation was very jerky. Half the time you couldn't see your own shots. Oh well, so much for getting rid of these as some kind of gaming machine.

Fortunately, at about 4:30 someone showed up to claim all the PPC Macs and the monitors that go with them. He showed up in a tiny little euro looking hatchback. The car was a loaner while his car was being repaired, and they only gave him the valet key and so he wasn't able to get the "trunk" opened. Neither of us could find any kind of release inside the passenger compartment either. Somehow though we managed to get everything piled inside on the seats. He is planning to personally take all the computers with him to Cambodia to give to a school there. He said he'd be taking them over one or two at a time on his trips to visit. I'm not sure how he's going to take the monitors, but he was overjoyed to get all these working computers. I was happy to finally be rid of them.

Of course, I've still got the IIci and the LC II. I haven't gotten any more emails and have deleted the ad for now. I have a feeling these two computers are going to end up at the recycler.