I made myself a nice set of knock-down fold-up sawhorses. These are modeled after a set my dad has had for a long time. He couldn't remember where he got them or who made them or anything, and after lots and lots of searching the internet to see if I could wrangle a pair for myself, I decided to see if I could make my own. 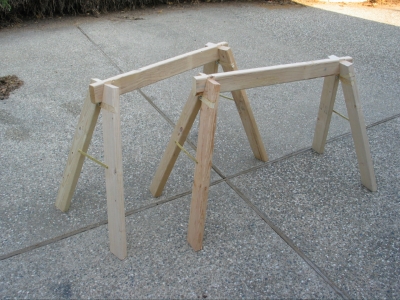 I have been using some crummy sawhorses that were made from 2x4s and those hinged metal brackets that you nail/screw into the wood. They worked but they never felt very sturdy and a good whack has made some of the screws rip right out. They also don't fold up and have been taking a lot of room in my garage. I wanted to replace them, but I also wasn't going to spend a fortune. In the past I've thought my dad's sawhorses would be fairly simple to reproduce, except for the exotic hardware his use for the hinges. When I stumbled upon a set of table leg spreaders at the hardware store, I decided that was really the only tricky bit I needed. I could make the other hinge myself. 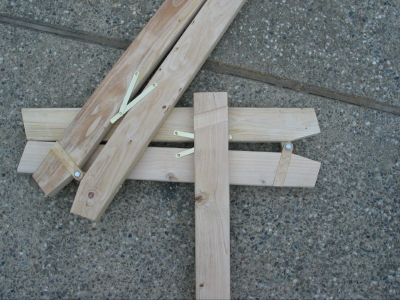 You can see the design is quite simple. The legs sit in dados in the cross-beam, and the spreaders force them to pinch together which lets you pick up the entire sawhorse and move it around without it falling apart. The cross-beam was the easiest part to make, which is good since if/when it needs to be replaced it will be very easy to do. The hinge at the top is made from a 5/16 hex bolt and lock-nut through 3/4-inch plywood. I cut a 1-inch dado in each leg for the plywood which is glued into place. The cross-beam rests on the plywood. The whole setup is quite solid and strong. The spreaders were kind of pricey ($7 for a pair!) so if I ever made another set of sawhorses I might see about making my own spreaders too.

Liked your design and I think they are exactly what I was looking for. Would you mind give more data of the cuts ? How long are they and dimensions of the wood (2"x4") ? Do you think the load above the plywood´s hinge would be a failure point ?

They are standard 2x4s, no complicated dimensions. I cut the angles at 15 degrees. I made them tall enough so that they are around table height when assembled so I can use them for temporary table legs when needed.

I have had the plywood hinge crack over time from being flexed when assembling and disassembling. I've started putting a large washer on each side of the hinge when putting the bolt through to keep the plywood from cracking.

You say that used a 3/4 plywood in a 1 inch dado on the legs, but if you have used a 2" x 4" wood your hinge will end up with 1/2" of gap. Is that correct ? Your hinges look flushed with edges and I could not see this gap in the pictures.