Seven may not think anything about the laser, but he's nutso for the Fast Traxx! I have no idea why I never tried it before, probably because it's been put away for so long and back at Wild Rye when I tried my big truck but there just wasn't enough room. But here at the new house it works great on the huge paved driveway!

Seven is not afraid of it at all. He chases it insanely, and if it slows down for a second he bites it and picks it up. He kept flipping it over so I had to switch to the Ricochet which is a 4-wheeled double sided one. When I originally got the Ricochet I had hoped it would be an improvement over the Fast Traxx, but because it's 4 wheels instead of tracks, and also only 2 wheel drive, it has no off-road capability at all. On a giant paved surface though it works great. I am afraid Seven is going to shred the wheels though when he bites them and sinks his teeth in and shakes the whole toy around.

He became so obsessed with them that when I picked them up to stop, he was jumping high in the air to try to snatch them. I think he thinks they're giant squirrels and he needs to kill them. When I put them on my workbench he just stared up at them intently wanting them to come back down so he can play more. I don't think he's figured out yet that I'm the one driving them. 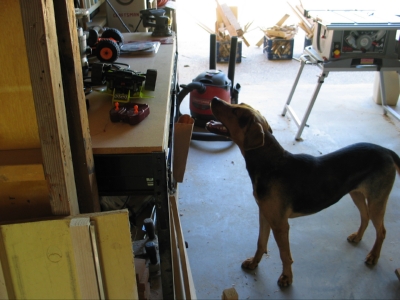 It looks like I won't have to worry about Seven getting enough exercise anymore. He's laying on the floor at my feet panting like crazy. No doubt this is going to add another word to his vocabulary. Now I just wonder if I can keep the batteries charged up!

Watch out! Seven could become a victim of obsessive-compulsive disorder! That is why I stopped doing the laser pen with Paris.

When Paris and Madison heard Seven barking on your video they went nuts. They were sure Seven was about to come in the door! Madison got all excited and acdtually started playing with Paris. Since she hardly plays at all anymore, it appears I can just play this video to get HER exercised!

I put him to the ultimate test: I opened the gate to see if he was aware of his surroundings or if he was completely obsessed with it. As it zipped toward the gate he slowed down and stopped at the gate and stood there howling and barking at it to get it to come back inside where he could play with it.