Remains of a good 4th

Yah, I'm a little slow in getting this posted. Had to go right back to work after the 4th and have been working every day since. 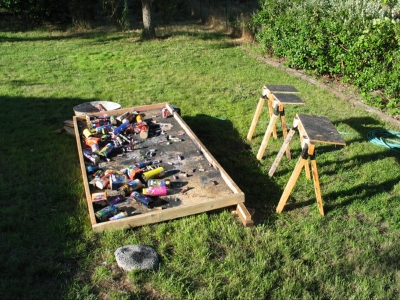 Party was great. Everyone really enjoyed the Skee Ball. I even had it spitting out tickets and had prizes people could "earn." With the Skee Ball on free-play though it was kind of pointless, but people thought it was fun anyway. Next party I think I will see about putting the Skee Ball on a different size token than my other machines and give people a pre-allotted number of tokens for them to earn tickets with.

Pat did a great job with the BBQ. The burgers came out really good. It was hot outside, but not scorching hot and everyone ate outside on my deck. I even lowered the shade which I never use. 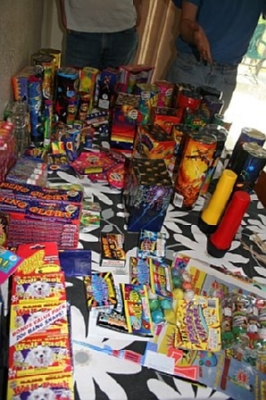 We started lighting things around 8pm when the sun was low enough that we could sit in the shade around the platform and do things like snakes and smoke bombs. One comment my dad made which I thought was kind of cool was that no-one was going to freeze to death during the show like we used to in Benicia. Finally something good about the Sacramento heat!

Between setting off a few things and figuring out who was going to sort the huge collection of fireworks we killed enough time for it to get dark and start sparklers around 9. Kim did a great job of figuring out the order for things. With 4 of us lighting the show kept moving pretty well, and whenever our hands were empty Kim would hand us something else to light.

I was afraid with the 2 large variety packs that there would be too much stuff and the show would last too long. Instead it worked out quite well and I'll probably do something similar next year. I also stopped worrying so much about what came in what pack and decided "you get what you get." Kim made notes on what was good and what was so-so, I don't know if she's typed them up and made them available.

For the pinwheels I made some 3/4" x 3/4" posts and had slots in the saw horses the posts would drop into. I pre-nailed the pinwheels onto the posts. This worked well because they could be changed out almost as fast as fountains. The bad thing was the 3 more expensive pinwheels were made badly. When they lit a cardboard backer immediately peeled and curled away towards the post and jammed it and kept it from spinning. Next year I will have to remember to remove the printed backer.

For the pre-show I bought a ton of Morning Glories and a ton of flowers (ground-blooms). I bought a 72 pack of regular flowers, and a 24 pack of the bigger ones (twice the diameter). The bigger ones definitely won't be coming back next year. They were nearly indistinguishable from the regular flowers. The main difference was the lower "hum" they made, but the crowd only noticed it when it was pointed out to them.

All-in-all I am definitely looking forward to next year.