Got my very first jukebox!

After years of searching, I finally picked up my first jukebox on Sunday. I have been looking for an AMI model C that I could afford for about 3 years. Back when I first got into the arcade thing, I was at my parents house discussing the stuff that used to be in the basement at my grandma's house. One of the things that was there was a jukebox, but we had no idea how old it was or what model or anything. After doing some searches on the internet for pictures we decided that it was probably an AMI model C from 1949, much older than we expected. The next day after I got home my mom sent me a screen capture from an old videotape which showed the jukebox in the background. Yep, we had identified it right!

Every time I have seen one come up for sale it has always been way out of my budget. Pretty much any jukebox where you can actually see the record changer in action is priced in the thousands of dollars range. Even if it's broken and missing half the parts! A couple of weeks ago I saw an ad on Craigslist for a whole lot of fixer-upper jukeboxes with starting prices of $200 each. Most were '70s and later models, but listed in the text of the ad was a mention of the one I was looking for. I jumped on the oppurtunity and called the guy up to find out how much he wanted. It was a lower price than all the others I had ever seen, but still out of my price range. I let him know that if he ever got one that was in bad enough shape he could sell it to me for what I could afford to let me know, and I left it at that.

Well on Sunday out of the blue I got an email that said he was willing to sell it to me for my offer, and how soon could I come and get it! I freaked and got on the phone right away with him to see when he would be available. He said that day was fine, or else I could come get it in the morning when the banks open. I ran to the ATM to see if I could get that much cash out, and sure enough, it let me! So I loaded the dog in the truck and took off to Napa in 100 degree heat, with no A/C in the truck. Traffic was stop and go all the way and it took forever to get there. When I got there he told me someone else had made him another offer, but couldn't pin down when he would be able to pay for it and pick it up. I was SOOO glad that I braved the heat instead of waiting until the morning when it was cooler! 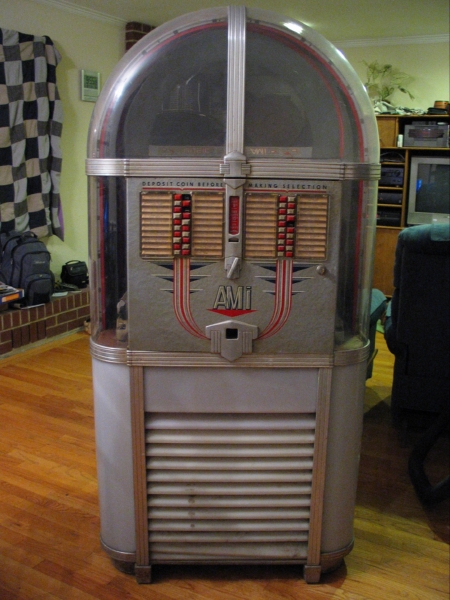 It's dirty, it doesn't work, but it's complete and only has one major break in the plastic. The color tubes on the inside are split down the seam, I'm not sure if I will be able to repair them or have to replace them.

Yesterday I took the gripper out and completely disassembled it (wasn't easy, the grease on it had turned to glue) and greased it back up. (I would have taken pictures but my hands looked like I had been working on a car engine so there was no way I could handle the camera.) It'll now scan for a record and pick it up and place it on the turntable when I plug it in. Can't figure out how to make it put the record away. Still a lot of work to do and I'm waiting for a manual that might describe how to take the plastics off and hopefully also include schematics. It looks like I'll be re-assembling my K'Nex rock tumbler, and at least polish the smaller parts that way. Not sure what I'm going to do for the large rails, if I can ever figure out how to remove them that is!

The rooms around where the jukebox is now have a very musty smell to them. I'm not putting it into the garage while I work on it. It gets to live in the house in a nice environment, plus it's just too hot in the garage to work on things anyway. Hopefully the jukebox will air out soon, but until then I'll just have to live with the smell.

Hello, I have TONS of information on this box and where to get parts. Been restoring my grandfathers for a few years now. Get in touch at the email above!

Hi, I thought about buying one of these as well for about a 1000.oo it's in great shape & it works but a few of the selectors don't work my best guess is BC the contacts need cleaned? Are these pretty easy to work on? If you don't mond me asking have you gotten your going yet? You have good taste. Hope to hear from you. Shawn

No, sadly, I haven't done a lot with it since I got it. I took apart the record picking mechanism and got it greased up and had it picking records and putting them on the turntable. I didn't get it to put them back though.

It started to get too close to the 4th of July that year so I had to put the project aside and I haven't gotten back to it.

Hi could you advise your e-mail address? I just purchased one of these machines. It will need parts and I'm currently looking for sources. Also if anyone has the manual in electronic format and is kind enough to e-mail it, That would be great. I usually work on slot machines and I would return the favor if you needed help with a slot.