Making Belts With a 3D Printer

Just as the 40th birthday of the Commodore PET rolled around I managed to get a Commodore PET 2001 with the itty bitty calculator keyboard and a built-in cassette drive. The cassette drive on my model is some off-the-shelf cassette player that Commodore hacked up with a bandsaw and mounted under the lid of the PET. 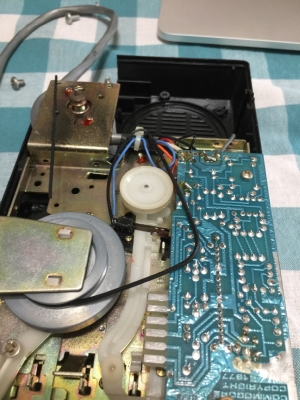 Old brittle belt Of course being 40 years old the belt on the tape drive had long since become stiff and brittle and broke into pieces when I removed the tape drive from the PET. Instead of trying to hunt down a replacement I wanted to see if I could make my own using my 3D printer! I've also got a few other devices that need new belts so this seemed like a worthwhile experiment.

The first thing I'd need to make a new belt would be the measurements. Since the old belt was ruined I took measurements off the tape drive by wrapping a string around all the pulleys and getting it tight. I didn't try to tie a knot but just taped the ends together. After pulling the string off the pulleys I measured how long the loop was and then doubled that to get a circumference of 256mm. I reduced the circumference to 95% giving me 243 and divided that by π to give me a diameter of 77mm. The numbers don't need to be perfect, just close, since the belt will stretch. 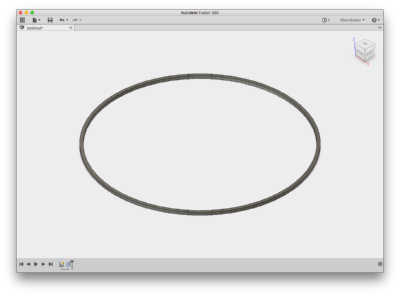 3D model of new belt Because the old belt was square, modeling the belt in Fusion 360 was super easy. Just draw a circle the right diameter, then offset a second circle by 1.18mm, the thickness of the belt. Then extrude the ring up by 1.18mm and that's it! I printed out the replacement belt in NinjaFlex with 100% infill. I did end up slowing the perimeters down quite a bit because of how thin the belt was and I wanted to give the NinjaFlex time to stick.

The belt fit perfectly on the first try! The Commodore PET tape drive is working perfectly now and I'm able to load and save programs to cassette. I'm curious how long the NinjaFlex belt will last. Will it be many years or even decades before it needs to be replaced? Will I be the one to replace it next time?

Hi. So two years later, is the belt still working?

Wow, has it been 2 years? Yah the belt still works just fine. And I've replaced a lot more in other cassette recorders, reel-to-reel tape machines, and VCRs, and they're all working too.

Even in audio gear? That's great:-) I have no R2R but several cassette decks, and VCRs too :-)