Are you ready for #AppleIIWeekend?

The retro computing high score challenge this weekend is a special one!

Unlike previous contests which were meant to inspire me to mess with computers in my collection that I'm not very familiar with and know very little about, this contest is about the Apple II which is the one I grew up with. 35 years ago in 1982 my family got an Apple II+ and in 1986 we got a IIgs. In 1990 I even worked on two different Apple IIe emulators for the NeXT computer. 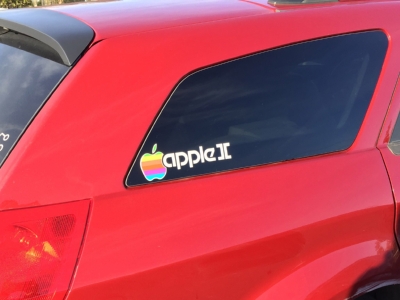 Because the Apple II is so special to me I'm making a very special vinyl decal as the prize for high score achievers. It's a hand crafted seven layer dip ... er ... seven layer burrito. No that's not right, I mean seven layer vinyl decal! It looks sharp on my car, I'm sure it'll look great on yours. If you can get the high score in a game then I'll send you one! Check out highscore.fozztexx.com for complete rules and how to enter.

Have an Apple II but don't have any games for it? No problem! 4am has been cracking the copy protection on lots of games recently and has put them up on archive.org. Don't have a disk drive or floppies? Then you can use the ASCII Express game server to load games over the cassette jacks on your II/II+/IIe.

One of the things on the Apple II that made games a little less enjoyable was how glitchy the joystick tended to be. When playing Lode Runner we got used to holding the joystick at the top to prevent accidentally getting killed when running across the top of enemies. A project called ninepin that I've been working on allows you to use a Raspberry Pi to convert a USB game controller for use on an Apple II! I've enabled several different joystick modes that will let you play joystick games, paddle games like Sabotage and Bandits, and also limit input to 4 directions for classic 4-way only games like Lode Runner, Hard Hat Mack, Miner 2049er, Serpentine, and many others.

I hope you'll be inspired to get out your Apple II or clone and play some games this weekend!