Another repair project that I’ve had sitting around for quite a while is a TRS-80 floppy drive. It was another “untested” item that I got for a reasonable price off eBay. When it arrived I hooked it up and it didn’t work. A little bit of investigation and I found that the spindle motor wasn’t turning on. Again I got distracted with something else and put the project aside for another time. 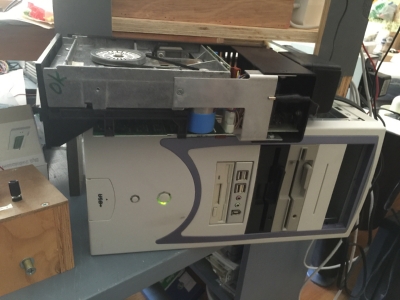 Precariously balancing I didn’t want to have to test the drive by constantly fiddling with the TRS-80 Model I since it’s rather flakey as it is. Instead I hooked the floppy drive up to my PC that I normally use with an internal 5.25” floppy drive. According to the information I found about connecting a Shugart drive to a PC, as long as I wanted to connect a drive as the B drive I should be able to plug it into a regular PC floppy cable where the B drive connects and not need to rewire the cable. Almost, more on that later.

To hook up the TRS-80 floppy drive I had to balance it sort of precariously on the edge of the PC tower since that was as far as the floppy cable would reach. With it hooked up and the PC booted into FreeDOS I tried to access the drive and just like when it was connected to the TRS-80, the spindle motor didn’t work. I could power it off and manually shift the head, and when the PC tried to access it the head would step back to track zero, so it was just a problem with the spindle motor.

While moving the drive around to try to get better access to something, suddenly the motor turned on! But as soon as I put the drive back down it shut off. Very strange! Thinking that maybe moving it around was flexing something I turned the drive this way and that way but couldn’t get the motor to come back on. I then tried balancing the drive on the PC case the same way I had before and sure enough, the motor started spinning again!

More investigation and I discovered that when a screw on the bottom of the floppy drive touched the metal PC case it was allowing the drive motor to work. I put the drive on a board to insulate it from the PC and got out a jumper lead with alligator clips. I clipped one end to the PC case and then touched the other to the screw and again the motor would spin. Very odd. Wondering if maybe there was a problem with the power supply in the TRS-80 drive I removed it completely and used the PC’s power supply and ran the same tests with the same results: the drive would only spin when connected to the PC case.

Removed #TRS80 floppy from its external power supply & hooked it to PC. Still have to ground frame. pic.twitter.com/J4wmSb2yI8

The PC case is actually connected to earth ground, not to the common black wire from the power supply. Connecting the drive frame to the PC case provided a different path for the electricity to flow. When I connected a meter between the drive frame and the PC case I got a reading of 12 volts. If I unplugged the spindle motor from the board I got around 10 volts. If I unplugged the driver board from the main board then it went to zero.

Again while shifting the drive around to examine something I suddenly had a working drive! This time moving the wire that goes from P13 on the main board to P20 on the driver board was making it work. I pulled the identical cable from the other drive and plugged it in and now the drive was working perfectly. Wiggling the cable and the drive kept working.

I popped the pins out of the bad cable and sure enough, the wire that brings common from the main board to the driver board was tarnished. The spindle driver board is also responsible for connecting common to the floppy drive frame, so with no path back to the power supply common, connecting the floppy frame to earth ground gave the electricity some place to go.

As soon as I tried to sand the tarnish off the pin it disintegrated. I cut off the remains and crimped on a new pin and installed the cable back in the drive. Now the motor was working great! But I still couldn’t get the PC to see a disk in the drive. 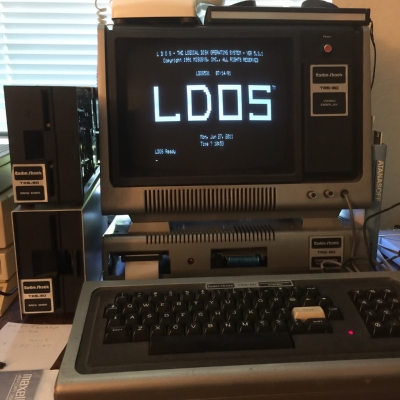 Dual floppies! One of the tests that a computer can do to see if there’s a floppy in the drive is to look for index pulses. Often I’ve been able to get a floppy drive working just by cleaning the index sensor. I tried that but that didn’t work. Suspecting that there may be more corroded pins I checked out P10 on the main board and sure enough, another corroded pin that fell apart when I removed it. I replaced the pins in P10 and tried again, and now I could see pulses coming from the index sensor!

Hooked the drive back up to the Model I and now I have two drives!