Rocky & Bullwinkle Are Split Up! 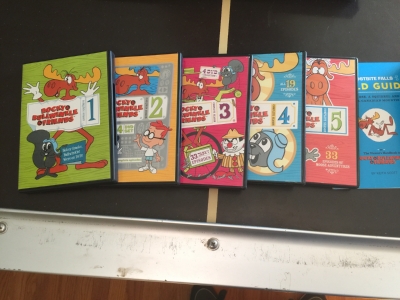 When I got onto my cartoon collecting kick one of the first things I ordered was the Rocky & Bullwinkle complete boxed set. As soon as it arrived the first thing I did was load the entire series onto my Plex server so that I could watch it at my leisure without having to mess with inserting the disks. I watched a couple of episodes and it was very nostalgic but didn’t get much further than that.

Since I’m not tied to watching TV on a schedule and don’t need to fill a half-hour time slot, there’s really no reason that I need to watch complete Rocky & Bullwinkle episodes. In fact, when Rocky & Bullwinkle first entered syndication, the show was split up into 15 minute episodes and the various pieces were shuffled around. Even the half-hour syndicated show which is still broadcast today was shuffled around, and the actual original order in which the supporting segments aired has been lost to time.

Of course it didn’t take long for me to realize that it might be nice to split out all the Fractured Fairy Tales, Peabody’s Improbable History, Dudley Do-Right, as well as the other supporting segments and stick them in my Animated Shorts folder since I found that I really enjoy watching shorts by letting them get randomly shuffled. 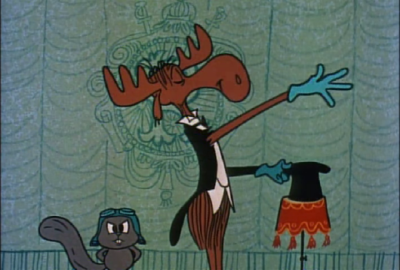 Easier said than done though. The episodes do have chapter markers on them, but the chapter markers are only at the start of a segment, not the end. For cases where two segments are right after another that’s fine, but many segments have short bumpers between them like the “Hey Rocky, watch me pull a rabbit out of my hat!” bit, and the end credits also had no chapter marker. That meant that I would somehow have to go through each and every segment to figure out where to split them.

Being lazy, going through 163 episodes to find all the split points seemed like way too much manual work. After skimming through a few episodes I found that there was a short black scene between opening & closing credits, and between every single bumper and segment. I wrote a script to skim through every episode and log where every black scene occurred. But I couldn't just split on the black scenes since many segments also had black scenes in them. Going through and figuring out which black scenes were the ones to split on was looking like it would also be a huge amount of manual labor.

For the most part that actually worked! But not always. There were a lot of exceptions that had to be dealt with. Sometimes the closing for a Fractured Fairy Tale would appear to be a bumper. Sometimes a bumper would get missed and would end up stuck onto a segment. In a couple of cases the chapter markers were in the wrong place or the opening credits were actually missing! And I even found that the three Mucho Loma episodes in season 5 somehow came from a sped-up PAL conversion and had not been slowed back down, throwing all my time estimates off.

Even after getting everything split out, the next problem was dealing with duplicates. Again being lazy, I didn’t want to go through and compare every segment from every season so I wrote another little script to go through the segment titles and compare them to find duplicates. That of course ended up not being as easy as it should have been either since the data that I had was filled with typos or identical segments had entirely different names. I ended up spending quite a bit of time fixing up the data.

While this ended up being a major amount of work, I’m really happy with the results. I have all of the supporting segments in their own folders in my shorts collection on my Plex server where I can watch them at random. I also put all of the Rocky & Bullwinkle story arcs into individual folders in my cartoons collection where they can easily be binge watched.

I added my specialized Rocky & Bullwinkle black scene/chapter comparer to my video scripts. While it’s highly specialized and still contains some hard coded stuff specific to Rocky & Bullwinkle, I think it may be useful for other shows and have already modified it a little bit to use it on other shows. I’ve also placed all the segment and bumper start & stop times on a Google docs spreadsheet in case you happen to have your own DVD set and would like to split things up in the same way.