I’ve really enjoyed my 3D printer, so much so that I wanted to see how many gifts I could make using it. Making things for kids is pretty easy, there’s tons of little toys all over Thingiverse. Ideas for everyone else though are much harder to come up with. Sure there’s lots of silly little trinkets, but those are things for handing out at a trade show, not for giving as presents. 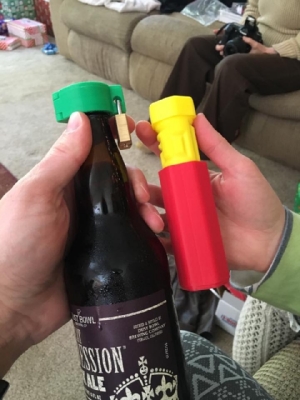 The beer lock & puzzle box I made Looking all over for ideas I found these beer locks and a labyrinth puzzle box. Instantly an idea popped into my head: I’d make one of those beer caddies and use the beer locks and put the keys in the puzzle box. Not an entirely 3D printed gift, but entirely home-made. And I was sure I had more than enough scraps around to make the caddy.

To me though a plain beer caddy with beer in it was boring. I had to do more than just make a simple box. My cousin had introduced me to a game called pig hole when I was visiting for Thanksgiving. It’s a really simple game he picked up in Germany and it seemed like it’d make a good drinking game. Looking on Thingiverse I even found a pig that would be perfect! The only problem was that the size of the game box would be wider than the beer caddy. How to fill the extra space?

Giving it more thought I decided I could put a couple of glasses in the middle between the bottles. That would make the caddy both longer and wider, giving me lots of room for the game board. 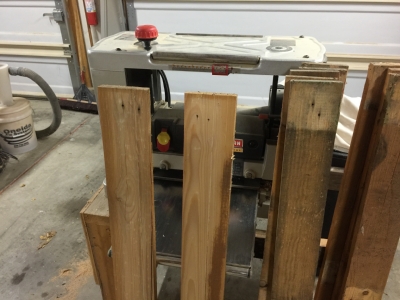 Salvaged pallet boards Looking around the garage I found a pile of boards I had saved from a pallet that I dismantled years ago. The boards were rough but 7/8” thick which was more than enough to mill down and leave me with at least 1/2”. After getting it all planed I ended up with 11/16” thick boards. Normally when using recycled wood I’d cut out all the nail holes and knots, but in this case I made an effort to keep as much as that stuff as I could, to add to that rustic look.

To separate the bottles and glasses I made an insert out of 1/4” plywood. To cut the circles I used my CNC to make a template. So that the router didn’t have to do as much work I roughed them out and then used the router to cut the holes in both the top and bottom at the same time. 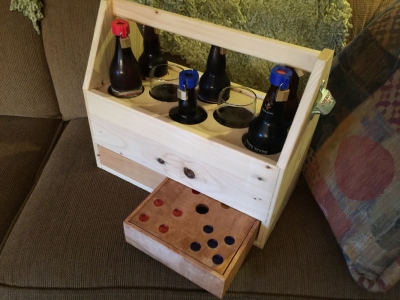 Finished caddy with glasses and games underneath The game storage was underneath the caddy. I used some small magnets on the bottom shelf and under each box to keep the boxes held in place and still allow them to slide out from either side.

All the woodworking was done using traditional joinery, no hardware, nails, or screws were used, just glue. The whole thing turned out great, although it was a bit heavy.