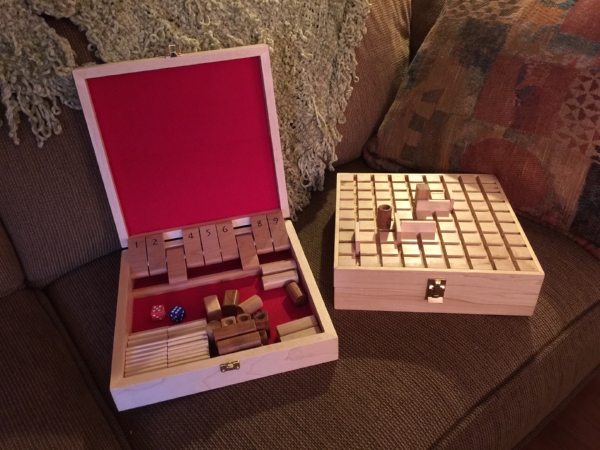 One of my favorite channels on YouTube is Steve Ramsey's Woodworking for Mere Mortals. At the beginning of December he did a video showing a game called Quoridor and showed how to make the board and the pieces for it. It looked like a really interesting strategy game, something that both my nephew and I would enjoy playing. But if I make something for him, then I've got to make something for his little sisters too. Plus I was concerned that Quoridor had a lot of small pieces that were going to be easy to lose.

I looked through a bunch more of Steve's videos and found he had a couple more simple games, and one of them was in a nice box with a latch. Inspiration hit, and instead of making three different game sets and giving one to each kid, I decided I could combine all three into one and give it as a group present. Of course this turned to out to be more work than I anticipated, and thinking back, I essentially combined three weeks of projects into a single project!

For the dark pieces of the Quarto game I used a branch from an almond tree in my own yard. It was a little tricky to square it up, but it provided enough wood to make all of the dark pieces. For everything else I used maple and cherry I bought at Home Depot.

On the Quarto board I decided to try an experiment using a stencil and stain. I cut the stencil out on my vinyl cutter and then stuck it onto the plywood and painted the stain on. It worked quite well, although there was a little seepage. Next time I think I'll remove the vinyl sooner, after leaving it overnight it pulled up a little of the surface of the plywood making some dark lines.

The games are all fun, and I really like the Quoridor and Quarto games. I'm definitely going to be making at least one more game box that I'm going to keep myself!