From Zed to Zee

A while ago I stumbled into a conversation between Eric Nelson and Rod Hull on twitter. Eric was mentioning that for a long time he has wanted to get a ZX Spectrum to add to his retro gaming collection, but living in the US they weren't exactly easy to come by and he also wasn't sure how hard it would be to make one work in the US. I jumped in and somewhat jokingly said that when he gets one I'll have it shipped to my house so he has to come over and play some air hockey. 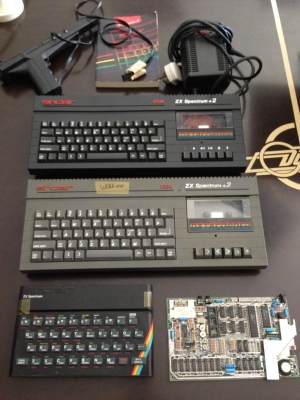 All of the different ZX Spectrum models run on DC voltages. Up through the +2 they simply use +9V DC, the ones after use a combination of +5V, +12V, and -12V. All very common voltages and there's no need to use the original UK power supply with a 110 to 220 step-up transformer. For the 48k I've been using a spare Sega Genesis 9V power supply. The +2 has a Datacorder built-in which is a cassette deck and draws a little more than an amp so I'm using a power supply which is a little beefier than the Genesis supply.

The +2B requiring so many different voltages meant that I couldn't use a simple wall wart power supply that was laying around the house. A modern switching power supply would be just fine though, and after some searching online I found that Jameco sold a nice little brick which would work perfectly. 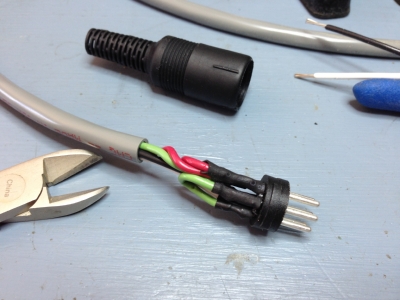 Power for the +2B The switching power supply I got from Jameco came with a DIN connector on it, of course it was not the right kind and so I had to cut it off and wire a new connector on. Not too hard, the pinout of the original connector was printed on the brick and after cutting the end off I used my multimeter to figure out the colors of the wires and connect them to the new connector.

Converting the video to something easier to work with was a little more challenging. All three models I was working with have a built-in RF output. While I didn't intend to use that type of connection for any length of time, it was there and I thought it might be an easy way to test out the computers. Since I don't have any TVs with a PAL tuner in them, I thought I could use a TV tuner connected to a computer. Try as I might though, I absolutely could not get any of the several TV tuner cards I have to tune in on the signals coming from a Speccy. I knew there was definitely output since I could plug them into a US TV and get a garbled picture, but the TV tuner cards always insisted there was no signal. Oh well whatever, I didn't really want to use the RF output anyway.

To get video out of the 48k I clipped a lead onto the motherboard where the signal is fed into the RF modulator, and then connected that up to the composite input on the TV tuner card. I told the card to expect a PAL signal, and that worked fine. Mostly. The color was very dull. But I knew it was working so I went ahead and did the "composite mod" to the 48k which basically is just removing the entire modulator board and connecting the composite pin directly to the RCA jack. After that I connected the 48k to my LCD TV's composite input, and it had no problem with the PAL signal and the color actually looked like it should, so the dull color was just a problem with the TV tuner card. Big surprise.

The +2 and +2B both have RGB output and I wanted to use that instead of RF or composite. As you've seen in some of my older posts, I've been using a GBS-8200 to convert 15khz analog RGB to VGA, so all I really needed to do was connect the RGB output from the Speccy to the input on the GBS-8200. Almost. 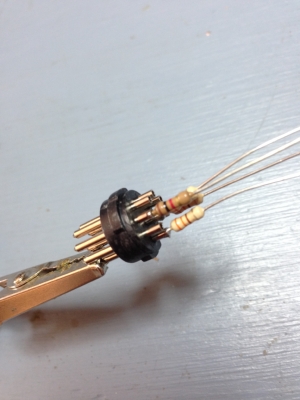 Adding resistors to the +2B video cable After a little searching, I found an excellent guide that explains how to wire up the RGB ports on all the different ZX Specturm models. The +2A, +2B, +3, and +3B all output an analog RGB signal, although the levels are a little high. All that's needed though are a few resistors, all of which can be stuffed inside the DIN connector of the cable which will go between the Speccy and the GBS-8200.

The +2 outputs a TTL level RGBI signal, similar to CGA, but not quite the same. Instead of having 16 colors, the ZX Spectrum only outputs 15, since black is still black when the intensity bit is turned on. There's also no brown color to replace the dim yellow like there is on CGA. It still requires a bit more circuitry than the +2B though, with 3 diodes and a whole bunch of resistors. Far too many components to fit inside the DIN connector. I considered making a special board to sit in the middle of the cable, but that seemed kind of clunky.

Since I had standardized long ago on using the DA-15 connectors for all of my arcade and retro computers, I really wanted to try to jam all the components into the DA-15 hood if possible. If I'd had some surface mount components on hand I probably could have made a tiny PCB and done it that way, but I was in a "gotta have it now" mood and I didn't want to wait several days for something mail order. Plus I really wanted to see some surface mount parts before I buy anyway since I`ve never worked with them before and didn't know how small the different types were. 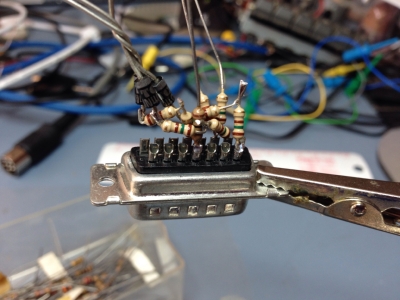 Video for the +2 requires lots of components I decided to wire up the RGBI to analog circuit "dead bug" style on the back of the DA-15 connector. It was an extremely tight fit. With it all soldered up I was able to bend everything just enough that it actually all fit inside the cover. It was a little delicate with things dropping out when I moved it, so I put some hot glue inside the housing where the wires feed in to keep things from moving around.

Oh and yes, when Eric came over to pick up his Spectrum, we did play some air hockey.