Yesterday I went to cut out some new stickers in preparation for the next theme week on RetroBattlestations. I loaded the design into the program, repeated it a few times on the page, and told it to cut. After it was done I cut the stickers apart and started to weed them but found it hadn't cut all the way through. And there were also a lot of scrape marks on the vinyl where the knife moved from one path to another. It only took a moment to realize what had happened, the cutter head wasn't lifting the knife or pushing it down, it had just dragged it all over the top of the vinyl. 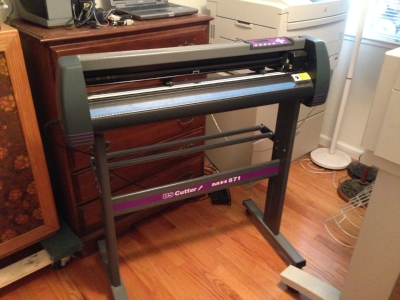 My vinyl cutter The vinyl cutter is an MH-871 that I got from US Cutter in 2009. It wasn't terribly expensive but it has worked pretty well for me. The biggest problem I have had with it is static electricity. As the vinyl moves back and forth over the cutter it tends to create a lot of static electricity buildup. Sometimes when cutting vinyl the static will discharge through the machine and cause it to reset. Usually I can just power cycle the vinyl cutter and start over, but of course that means that the previous piece of vinyl is wasted with an incomplete cut. Sometimes after a power cycle the cutter acts goofy for a while, but usually letting it sit off for a while and then turning it back on will fix that. I've found the best time to cut stickers is on an overcast day or a day with higher humidity which will greatly reduce static electricity buildup.

This time was different. Power cycling or leaving the cutter off for a bit wasn't bringing back the cutter head. I wasn't really sure what could have happened since I had just cut some things with it a week ago and hadn't had any static electricity issues. I took off the top cover hoping maybe there would be an easy fix with reseating a cable connection, but no such luck. I did find though that the manufacturer had used a tape measure as a way to stiffen the ribbon cable that leads to the cutter head! 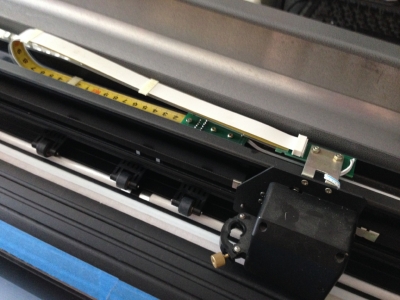 Made from tape measures! Taking the cover off the side I again found no actual circuitry or connections for cables. All the cables were fed through a hole going into a space under the cutter. Taking of the side of the cutter looks like a bad idea since I'd have to dismantle so much stuff, time to search the internet and see if there's any info on this problem.

Didn't take long to find out that the cutter head failing to go up and down is a pretty common problem with the MH-721, MH-871, and other similar models. Apparently static electricity builds up and then discharges through the knife, across the plastic holder, into the solenoid that controls the knife, and then down the wire into what was called the "Z chip."

Most everyone said that the "Z chip" was available from US Cutter and that it was an easy fix, just take the bottom off the cutter and swap out the socketed chip. Sometimes the company would even send out the chip for free. That's good, but I don't want to wait that long, I want to fix it now. Since I do a lot of electronics repair, I wondered if I might already have the chip.

I was able to find the chip for sale on the US Cutter site, they had it listed for $5, and had included a photo of it. Turns out it's an LM324 chip, something very common and you can get them for about 25¢ from most any electronics supplier. Seeing that it was pretty common, I dug through my bins of ICs to see if I might have one. As luck would have it, I did, and even had enough of them that I stuck them all in a tube and put a label on it! 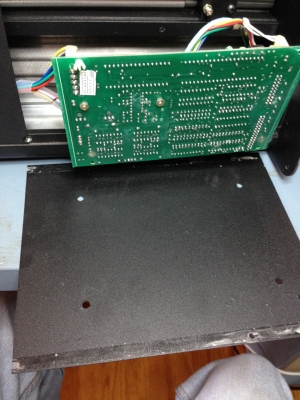 Shouldn't this have been properly secured? With chip in hand I turned over the vinyl cutter to see how to get inside. There's two metal panels underneath, the smaller one has the control board on it. I took out the screws and opened it up and found the control board was just in there loose, resting on the metal bottom plate with no standoffs or insulation. How many static electric discharge problems has this been causing?

There were no LM324 chips on the board, but one was marked HA17324A and a quick double check online showed it was a cross for the LM324 so I swapped it out. I put the vinyl cutter back together, making sure to secure the control board using some old motherboard standoffs. I fired it up and the vinyl cutter was working again!