Im not an expert on these things, just buy it already

A lot of the auctions I win on eBay are for items that are listed as “untested, as-is, for parts or repair.” While the sellers will post lots of pictures, they often won’t do any kind of research or investigation of what they are selling. This is great for me because 9 times out of 10, the thing I bought actually turns out to work just fine and doesn’t need any repair at all. And with computers it’s not unusual to find some nice upgrades have been installed that the seller didn’t mention or didn’t know about.

When the latest TRS-80 arrived the first thing I did was open up the EI and lo and behold, it had the RS-232 card! It also included a single power supply, and the ribbon cable to go from the TRS-80 to the EI. I disconnected the power supply and plugged it into an outlet and checked the voltages. They were within spec so I hooked it up to the new TRS-80 and turned it on. It booted up and I found myself at a BASIC prompt! 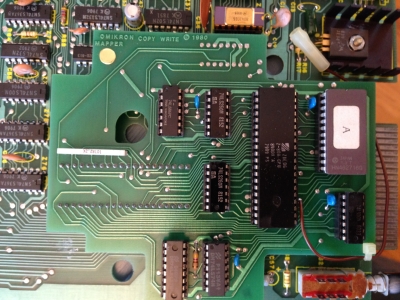 Omikron CP/M card Checking inside the TRS-80 I found that it had some upgrades. It was a newer style board which doesn’t need the extra Level II ROM board, but it does have the cassette upgrade. It also has an Omikron CP/M board. Interesting! There’s also a Radio Shack installed lowercase mod.

The EI also had upgrades inside. It contains a Percom double density controller and 32k of RAM. I ended up having to resocket all the RAM to get it to work, but the chips all seem to be fine. After having some problems getting the floppy controller to work, I got some help from Bernd Walter and he even sent me a new FD1771 chip.

None of these upgrades were listed by the seller, and the pictures they provided gave no indication that they were there. I really love finding unexpected add-ons and upgrades in the stuff I buy. It makes you feel like you really got a great deal!