Those boards don't work ... unless you've got POWER!

A few months ago I purchased a a TRS-80 Model 1 off of eBay. The seller had listed it with a $400 Buy It Now and $40 shipping. It had been up for a long time, and I figured why not and made him an offer of $60 expecting to be ignored or rejected. A few hours later though I got an email saying the seller had accepted my offer. A TRS-80 with monitor for only $100 shipped! But it didn’t have a power supply. I was hoping I could figure out a workaround. 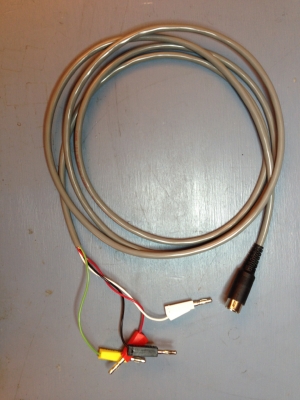 My cobbled power cable I made myself a power cable to try hooking it up to my modified ATX bench power supply. The voltages that the TRS-80 wants as input are a little strange, it wants 19V DC and 17V AC. Unfortunately it needed more volts than my ATX bench supply provides, so I wasn’t able to get it to come up by feeding power into the TRS-80’s normal power jack. I opened the TRS-80 up and tried clipping in the power supply past the internal voltage regulators. The TRS-80 seemed to boot up, although it was hard to read. The HSYNC was broken. Replacing Z6 fixed the sync problem, but then I couldn’t get the computer to boot anymore.

Since I knew I was going to need an expansion interface in order to add an RS-232 port, I kept checking eBay occasionally for one. A few weeks ago *two* of them showed up. One said that it came with the RS-232 board, the other didn’t say, but had another TRS-80 and a floppy drive. The first auction with only the Expansion Interface and RS-232 card ended at close to $250. I didn’t really want to spend that much, so I didn’t win it.

After seeing how much the first auction had ended at, I knew I had no chance at the other one since it came with even more things. The auction ended late at night (around 11pm) and I happened to be awake when it ended. I kept getting notifications on my iPad from eBay about the auction ending and eBay encouraging me to bid higher so I don’t let it get away. Bummed I clicked over to my email and started deleting the messages from eBay when I saw eBay had sent me a message saying that I had won! And for under $200 shipped! Wow! 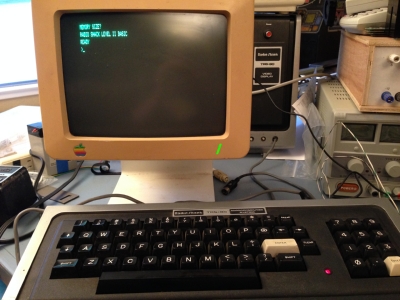 TRS-80 number two works! When the Expansion Interface arrived with the other TRS-80 and floppy drive, it also had a single power supply dangling out of the Expansion Interface. I disconnected it and examined it to see if it had been cracked open for repair. It looked intact so I bravely plugged it in hoping the magic smoke wouldn’t come out (if you’ve been following me on Twitter you might have seen that’s been happening to me a lot lately). No smoke, but lots of humming from the AC, and testing with a multimeter the voltages looked correct. What the heck, I plugged in the new TRS-80 and hooked it up to my monitor, and the TRS-80 worked!

Since I only had a single power supply, I felt I had no way yet to test the Expansion Interface. I decided since I now had a known good working power supply, I should go back and try the original TRS-80 again to see if I could figure out what was broken. Using the working power supply I hooked everything up and turned on the TRS-80. It was working fine! Turns out I really hadn’t mangled the board when I swapped the single IC, it was just a problem with the way I was trying to power it up.

The AC voltage from the TRS-80 power supply immediately goes into a rectifier and is used to generate the +5V and -5V. Since it passes through a rectifier, it’s not really going to care if the voltage is AC or DC. The trick is that there needs to be a negative voltage coming in relative to ground. I had already tried using +5V and -5V as a substitute for the AC voltage but it didn’t work. I decided why not try +12V and -12V instead. With +12V hooked to pin 1 and 2, -12V hooked to pin 3, and ground on 4, I turned on the TRS-80. It worked! But running it that way meant I was making the components work a bit harder and put out more heat to generate the +/-5V.

I also have a variable DC power supply, but it only has two variable outputs and a fixed 5V output. In order to fire up the TRS-80 I need three voltages, and I already know that the 5V won’t be enough. I also need a negative voltage and the variable power supply only outputs positive voltages. Or does it?

I remembered there was a way to connect the two variable outputs in series to double the maximum voltage. Maybe I could put it in series mode and somehow center tap the new combined voltage? With the power supply into series mode and the master control set to 7V, I tested the voltage with my multimeter where the manual said to attach and saw that I was getting 14V. I then tried sticking the common side of the meter into the common jack that was intended only for the primary voltage source, and I was reading 7V. Moving the positive meter lead to the secondary voltage source’s common side, and I was getting -7V! Ok, but I still need +12V for the third voltage. Using the ATX bench supply for the +12V, I connected the common from the two power supplies together and I now had the three voltages I needed. 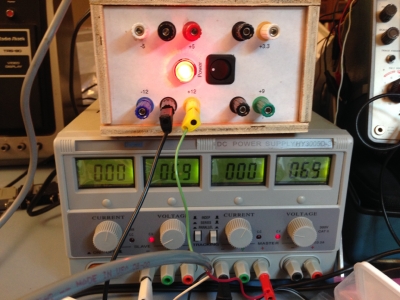 Linking two power supplies I nervously connected both power supplies to the TRS-80 and turned everything on. It worked! Now curious about just how much voltage I need for positive and negative, I turned off the TRS-80, turned the voltage down so I was getting +/-6.5V and turned it back on. It still worked. I then tried +/-6.0V, but the video signal had a lot of dropouts. At +/-6.1V though both TRS-80s worked fine.

But my experiment shows that a heavy linear power supply using a large transformer (or in some cases *two* transformers) isn’t necessary to power the TRS-80. It doesn’t really want or need AC, it just wants a negative voltage input along with two positive voltages. I’ll keep researching to see if I can get a switching power supply that can provide the power necessary.

While probably not exactly what you want, there is a design for a replacement Model I power supply using modern parts: http://www.trs-80.com/wordpress/zaps-patches-pokes-tips/zaps-model-i-power-supply/

Already very aware of that and that design requires two very large expensive transformers, which are not necessary. I want a switch mode power supply that only outputs DC and doesn't need those large transformers.

I've bought a loose TRS-80 Model I on eBay as well. It's on route to Brazil... I've already got 3 DIN5 male plugs. Now I need to make a power supply, could you give some hints? Reading your article, I was not able to clearly understand what the 3 voltages. Is it +12v, +7 / -7 and ground ?

Yes exactly. The +12v goes to the original DC pin, the +6.5v and -6.5v go to the AC pins. Obviously polarity does not matter for the two AC pins.

Based on your findings and crossing with the original voltage range, what about using just +12v (DC) in the original DC pin and the same +12v plus -12v (in the two AC pins) ? This way, it could be done with a simple +12v/-12v/common ground power supply. THis power supply could be linear (with transformer) or even a switching power supply... Other way is removing/desoldering all the regulating circuit parts and putting jumpers to the DIN5 connector and using a modern PC small form ATX power supply. But I don't like messing with a 1977 design... let's keep it original.. Regards

Yep, as I wrote in the article, you can run it with just +12V/-12V. But that makes the whole thing run a lot hotter since it's having to dissipate a lot more of the voltage as heat.

Interesting post, and congrats on getting the Model I up and running. It's amazing how much work goes into keeping these old machines from not that long ago up and running.