I'd buy that for a dollar! 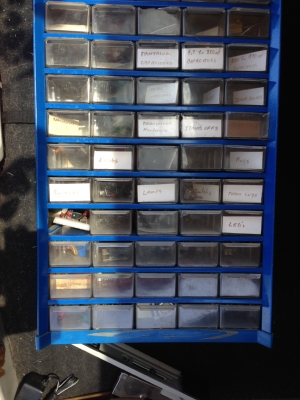 Tons of parts I decided to go hit the garage sales again today, hoping for another good retro computer score. While I didn't find any computers or old game consoles, I did find a little drawer unit filled full of electronics components! The asking price was only one dollar, so I quickly snatched it up without even bothering to examine what the parts were. I was very anxious to go through everything and see what I kind of a score I had made!

I had to lay it down on its back in the car since I didn't want the whole thing falling over or the drawers falling out. When I got it home all the parts had fallen to the back of the drawers, but most everything was still organized. I started going through the drawers one-by-one and getting everything back into drawers, and snapped a bunch of photos of things I couldn't identify or found somewhat interesting. I even found 4 pennies so my total price for the parts collection was only 96¢! 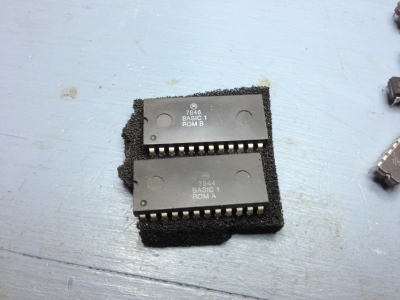 These ROMs were in a drawer I found several ICs scattered through the drawers. There were some 4116 RAM chips, an INS8154N which I'm not sure what is, several other small ICs that I didn't really inspect, and a couple of ROMs that are marked "7844 BASIC 1 ROM A" and "7846 BASIC 1 ROM B". Could these ROMs be from a retro computer? Maybe I did end up with a computer score today.

The 7844 and 7846 are most likely date codes, meaning they were manufactured in 1978 towards the end of October or early November. Googling for the other information on the ROMs didn't really turn up much of anything. Dumping them and examining their contents might help to figure out what they are and where they came from.

To read the ROMs there was no need for me to get out some breadboards and LEDs and a notepad and try to transcribe them byte-by-byte by slowly flipping switches. I simply popped ROM A into my EPROM programmer. The ROM had 24 pins so my first guess for a pinout was to try a 2732. I told the programmer to read the chip and up on the screen was suddenly a bunch of junk interspersed with BASIC commands. But when I inserted ROM B all I ended up with was a screen full of FF bytes. 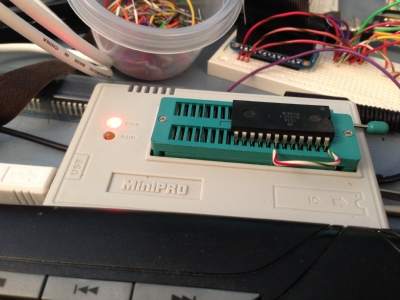 Jumpering the /OE to read ROM B Since the ROMs were custom made and intended to be used as a pair, it was likely that the second ROM had the enable signal reversed so that no extra circuitry would be required to use the two ROMs together. I jumpered pin 18 to pin 24 to force /OE high and tried again. The ROM read in this time, although there were still a lot of FF bytes. Perhaps a large portion of the ROM has gone completely unused? Seems odd for anyone to waste bytes in a computer from 1978. Ah, of course, these are both 2k ROMs, not 4k ROMs and instead of duplicating when it was read, the programmer read FF bytes instead.

I found CSAVE, CLOAD, SET, RESET, and POINT in the BASIC commands, but no PEEK or POKE. The errors that it can print are HOW?, WHAT?, and SORRY. It would seem that these are Level 1 BASIC ROMs from a TRS-80 Model I. I tracked down a copy of the Level 1 ROMs and compared, and they are a perfect match. So I did end up getting some retro computer parts after all!

I've attached the ROMs along with a hexdump so you can examine them too.

Thanks for posting the pics and dumps of the Level I ROMs!

I was xitedd tto find ersion I hadn't seen before, but the disassemmbbly doesn't seem to make any sense, and when I tried to run an emulator with this chip set, it just froze without ever printing "READY". Are you sure that what ended up here on the blog is the same as the dumps that perfectly matched the copy of the Level 1 ROMs that you tracked down somewhere?

[Reposting. Sorry about all the doubled and missing characters above. The problem appears to have been a malfunction of Chrome's autosaving of form contents when disk space was almost gone.]

Thanks for posting the pics and dumps of the eel I ROMs!

I was excited to find a versinI hadn't seen before, but the disassembly doeessn't seem to make any sense, and when I tried to run an emulator with this chip set, it just froze without ever printing "READY". Are you sure that what ended up here on the blog is the same as the dumps that perfectly matched the copy of the Level 1 ROMs that you tracked down somewhere?

I guess when I found ROM A matched the first 2k of the Level 1 ROM I found online, I didn't bother to see if ROM B matched the second half. Maybe the ROM B is bad or maybe I wasn't able to read it correctly after all.

I checked the TRS-80 schematics and the 2732 pinout, and it looks to me like your method should have worked, so I guess it is a bad chip. Oh well. Thanks again.

It's interesting how there seems to be some kind of pattern or organization of the data though, even if it's bad. Maybe one of the data lines is bad and it's holding one bit high or low?