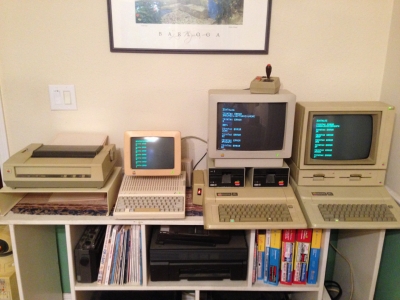 Enough computers for a classroom! After a post to G+ of a picture of three of my Apple IIs all setup together, a discussion started about what could be printed on a dot matrix printer that would make kids go “Wow!” The only idea was banners and several people remembered some very large posters that they had seen in computer labs when they were younger. The posters had been made of pure text, and were too large for a single sheet so they were printed in long strips and then taped together.

I have seen lots of different kinds of pure text pictures, usually called ASCII art. There are lots of different kinds, some are very simple cartoonish drawings, some used letters to recreate a photograph. Two of the best ones I have encountered are photos of Kirk and Spock, designed to print on a single sheet of paper and both have an amazing amount of detail visible.

The posters that came up in the discussion were different than any other ASCII art I had seen before. These posters didn’t just use a single letter to create a shade, they had been made to overprint several letters on top of each other to make the shade darker and denser. They also packed the lines closer together to eliminate as much white space as possible. And they were created with EBCDIC, not ASCII.

The posters used 132 character long lines, intended to be printed on line printers that used 14 inch wide paper. Several long strips would then be printed and taped together side by side. If I was going to reproduce them on my dot matrix printer, I would have to reorganize the data so that I could print strips that were only 80 columns wide.

As I started to examine the files to see how they were structured, I found several notices from the person that had created them, along with a date of 1973. Wondering how they had been created so long ago, I did some searching and actually found an interview with the creator describing the process. Very interesting! 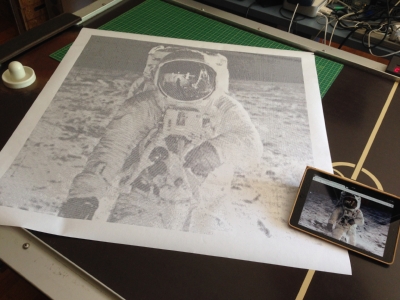 Not bad Knowing now that they were intended to be printed on line printers that were not capable of doing any kind of graphics, I wasn’t really sure that a dot matrix printer was “authentic” enough. I could fiddle around with trying to make the dot matrix printer reproduce a font similar to a line printer, but it’s low resolution. At that point I decided maybe I should use my large format DesignJet printer instead. I could more accurately reproduce the line printer’s text with an appropriate font, and as a bonus I wouldn’t have to tape any sheets together. And even though the DesignJet isn’t nearly as old as the Apple Dot Matrix Printer, and not even close to as old as the original line printers, it’s still quite retro since it is from 1997.

I cobbled together a quick program to re-assemble all the strips in the file into single continuous lines. Another quick search and I found a quick & dirty PostScript program that would take the text output and print it all on a page. I used Ghostscript to convert the PostScript file to a PDF, and view the output on screen. The aspect ratio was off, but I adjusted the line spacing and created another PDF. This time it looked pretty good so I printed it out and compared it to the original photo. Not bad! 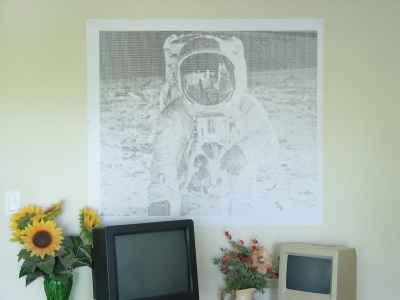 That looks great! It turned out that the character spacing of the font was still a little off, so I adjusted the PostScript to use kshow so I could adjust the kerning. The output from that was perfect.

If you’d like to get a poster size copy of your own they’re available in my shop.