On the Interwebs. Sort of.

After getting the Mac SE upgraded to 4 megs of RAM and a working internal HD, the next thing to do was to see if I could get a working web browser on it. 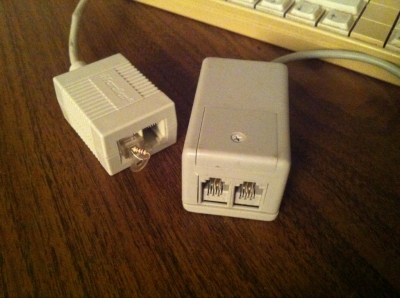 The SE doesn't have an ethernet card, but it does have built-in AppleTalk networking. I have plenty of PhoneNet adapters. I ended up using another Mac (the one that I fought to put Linux on) running MacOS 9 and LocalTalk Bridge to move traffic from LocalTalk to Ethernet and back. It worked well and I was able to mount a share from a Linux box running Netatalk 2. Moving files without having to resort to SneakerNet or downloading one at a time through ZTerm was great.

The next challenge was to get IP traffic to route over the AppleTalk network. MacTCP is able to encapsulate IP traffic into AppleTalk packets using a protocol known as MacIP. Some sites out there claim that Netatalk is able to act as a MacIP bridge & router, but that information is false. Netatalk only handles sharing files via the AppleShare protocol and doesn’t do any kind of MacIP bridging. 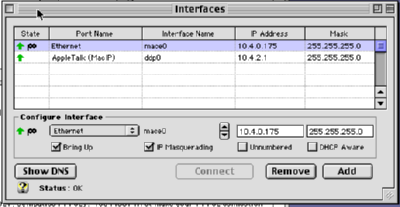 A Mac can be used to bridge MacIP, but unfortunately by itself the LocalTalk Bridge software will ignore the MacIP AppleTalk packets. There’s a package called IPNetRouter which runs under MacOS, and is able to move *some* MacIP packets between AppleTalk and Ethernet. It does not bridge the interfaces though and requires putting a separate subnet onto the AppleTalk network. You can enable masquerading on the Ethernet interface so that packets coming from AppleTalk will appear to come from the IPNetRouter Mac. Another option is to change configs on your internet gateway so that it knows to reach the private AppleTalk subnet by routing through the IPNetRouter Mac.

For some reason though IPNetRouter absolutely refuses to forward packets that come from the internet back to the AppleTalk network. It doesn’t matter if you’re using masquerading or not. It will take packets from AppleTalk that are destined for the outside world an forward them to your router, but it just drops all the return packets. 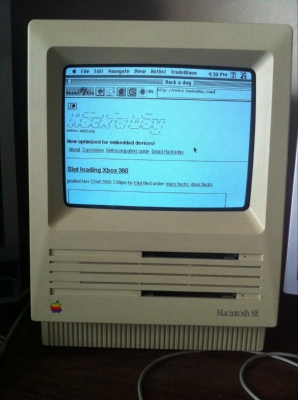 MacWeb 2.0c has options to send traffic through a proxy server, so I installed Squid on my Linux router and allowed access through Squid from my LAN. I told MacWeb to proxy the traffic through Squid and I was able to finally load some web pages. Most pages look like crap, but the Hack a Day retro site loads well enough.

While this setup works, it’s not really a clean solution. MacWeb is completely unable to display any images and I’d like to try NCSA Mosaic, but NCSA Mosaic has no proxy settings. Running a web browser that can't display images is pretty much pointless. If I can't display images from a web page I might as well run w3m through a terminal emulator. If there's no web browser that works I may have to resort to a basic image viewing app.

There is a program called Viacom internet gateway for Mac that is a full blown gateway router for Mac. It will do what you want from Ethernet to AppleTalk if you can find it.

Stupid autocorrect... Should be vicom not Viacom..