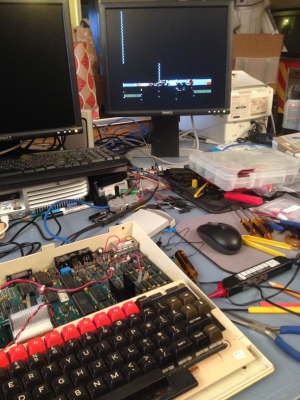 Glitchy Not long after getting the BBC Micro working with US power and a VGA monitor, I discovered it had an issue in modes 0 through 3 when hitting return enough times to make the screen scroll. At first the prompt would move over towards the center of the screen, and then it would start filling the screen with garbage. It sort of looked like bad RAM, but I wasn't convinced of that because I noticed that some of the garbage would actually twinkle as I typed, so it appeared more that the BBC Micro was displaying the wrong area of RAM.

I found a simple RAM test that I was able to type in and run, and while not entirely conclusive, it didn't detect any bad RAM. Since I wasn't real familiar with the internals of the BBC Micro I wasn't really sure what to do next. I posted the picture to a BBC Micro mailing list and it didn't take very long for them to tell me where I should be looking. They too thought it looked like a problem with the video displaying the wrong RAM location, so they suggested it was probably either the 7438 at IC27, the 74LS10 at IC36, the 74LS283 at IC39, or the 74LS00 at IC40. Since video worked fine in modes 4 through 7 a broken 74LS283 at IC39 seemed less likely. 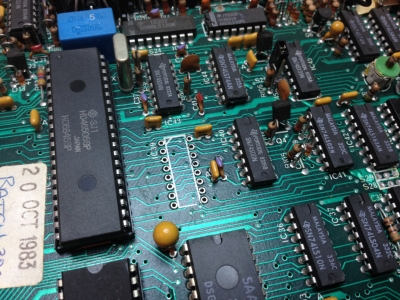 IC cleanly removed Repairing this seemed like a great time to try out a Hakko 808 desoldering gun I got a few months back. It did a great job cleaning out the holes for the legs on the ICs. Since it was so incredibly easy to remove the ICs, and since the ICs are fairly common and still cheap 74 series chips, I pulled all four and put in sockets.

I then put the removed ICs back in the sockets and made sure the BBC Micro was still broken in the same way. Of course it was now broken in a completely new way: it wouldn't boot up at all. I tried to remain calm but I was really disappointed. I felt I was so close to repairing it and I was being very careful to not damage the circuit board while removing the chips. I shut it off and flipped the PCB over and went over all my work with the large magnifying light I have. Discovering that somehow I had actually managed to miss soldering the Vcc pin on a single socket I fixed it and tried the BBC Micro again. It booted up this time!

I verified that the problem still existed and then one at a time swapped out the suspect four chips with new ones. It turned out that the only bad chip was the 7438 at IC27. Now that it's fixed I can scroll the screen perfectly!

Hi, Chris. Thanks for an informative and interesting blogpost. I had exactly the same problem with my Beeb -- exactly the same, right down to the screenshot you took of the weird glitchy artifacts.

But in my case it was in fact the 74LS283 IC39 adder that was faulty. I know this because I socketed and replaced the other three chips you mentioned first, including IC27, and the problem remained! It was only replacing IC39 that fixed it.....