At work an old HP LaserJet P2035N printer just had the fuser go out. Quickest solution was to replace it with a new printer rather than hunt down repair parts and go through the trouble of swapping them in. Looking at the price of the same printer, it's currently at close to $500. However there's what seems to be the same printer for under $200, but it's a P2035. Notice the missing N in the model number? 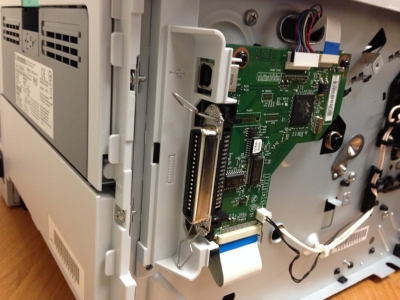 Parallel card in P2035 The P2035 printer was ordered, and when it arrived the first thing I had to do was see what was under the cover. The interfaces are all on a separate card under a cover that is only clipped on. All of the cabling going to the cards were the same on both models, so of course I'm going to have to swap them! 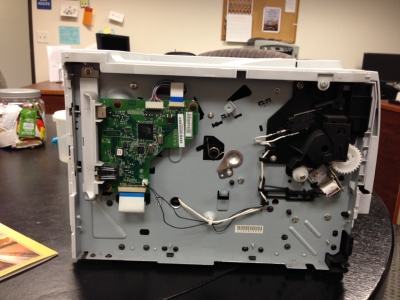 Ethernet card in P2035N I expected that the N model must have additional circuitry or ROMs to support the ethernet card. Nope. After swapping the card the printer worked no problem. Apparently the card with the external interfaces takes care of everything and feeds the data to the printer in a standard way so that the printer doesn't need to know anything.

I really can't believe HP is charging $300 for an ethernet card.

The jet direct card lives on..

Something like a razzleberry pi (model B) will become your best friend in these circumstances!!!!!!!!!!!

It is always the little details that grab you. Look at what they chearge for inks and toner :)