A computer that I remember hearing about a lot, but had never seen, was the BBC Micro. It was a near mythical computer that "people in the know" would talk about. I really didn't know much about it, but it sounded very interesting to me. I always wanted one and now I finally have one. 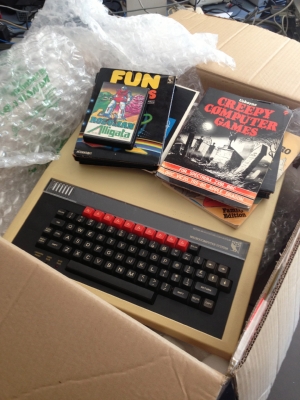 My BBC Micro My BBC Micro model B is the real deal, not a US conversion. Of course that presents a couple of problems. The first is the power standard is different, it wants 220/240V at 50hz, and the US standard is 110/120V at 60 hz. The second problem is that like most computers of that era, it was designed to connect to a TV, and the TV standards are also different in the US.

Next problem was how to deal with the video. The BBC Micro has three video outputs: The UHF signal which is color, a composite PAL video signal which is only monochrome, and a TTL level RGB signal which is based on PAL frequencies. My first plan was to use a composite video to VGA adapter like I have been with the Commodore 64. But since the composite is monochrome, that didn't seem like a very good solution. As a pack rat, it turned out I had a CGA to VGA converter board sitting around that I hadn't even tested yet. I saw it for a good price and was pretty sure since I'm into old computers and arcade things that I would probably find a use for it. 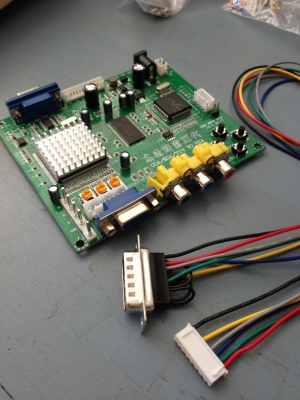 CGA to VGA converter and harness The CGA to VGA converter included a harness that connects to the odd-size connector and since I only have one of those, I wired the other end to a male DA15 connector. I didn't want to wire straight to a 6 pin DIN connector in case I wanted to use this board in other places. It made sense to use the 15 pin connector because years ago when I discovered that the arcade machines use the same video standard as my Apple IIgs, I decided to "standardize" on a video connector which was the same 15-pin D-sub that the IIgs (and older Macs) use. 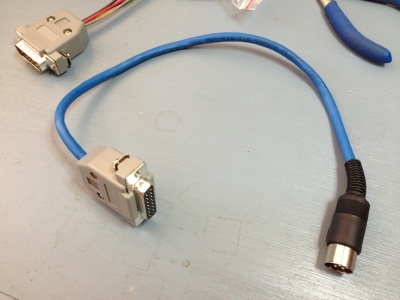 DIN6 to DA15 pigtail I then made another short pigtail with the appropriate DIN connector on one end and the DA15 on the other. The BBC Micro provides red, green, blue, composite sync, and ground. Needing at least five conductors I grabbed a short piece of Cat5 cable. I connected the solid color of each pair to the RGB and sync, and connected all of the white stripe conductors together to ground on the DIN side, and to their individual grounds on the DA15 side.

When I fired it up for the first time it worked perfectly! The converter did a great job with handling the different frequences, and the video looked sharp and crisp in all eight of the video modes the BBC could output.