It's really dirty because it's TRS

Feeling like I don't have enough TRS-80 computers in my collection, I purchased a Color Computer 2 from eBay. There were only a few photos of it and not enough info to determine which specific version of CoCo2 it was. The seller only took the time to plug it in and say "no light, as-is untested." I got it for a good price because of that, and I'm sure because it was really dirty. 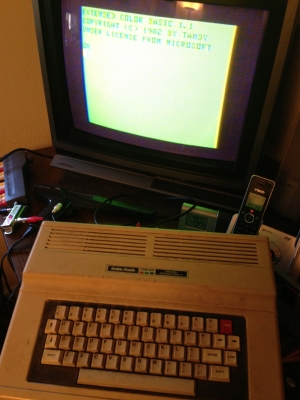 Once I got it the first thing I did was hook it up and was delighted to find it works! Or at least so it seemed. After turning it on and off a couple times it was inconsistent with booting. And when I went to type on it, nothing. The keyboard doesn't work at all.

I opened it up to see how much damage there was inside and found that it's the first version of the Korean model with Extended BASIC. Someone previously had opened it up and upgraded it to 64k. The inside is dirty and I found a couple of large gouges on the motherboard, but the traces that appear to be damaged test fine.

So far I can't find any CoCo2 specific schematics anywhere, although I've found CoCo1 and CoCo3. For the moment I'm working off a CoCo1 schematic since I understand the CoCo2 is pretty similar. I still need to get out the logic probe and check signals on the 6821 PIA and see if it's working or not.