A couple of days ago I decided to visit Surplus Stuff in Sacramento for the first time. Since I've been on this retro computing kick I thought it might be fun to check out what they had and see if they had anything interesting. Found a lot of really old stuff along with stuff that was only 5-10 years old. They're not as big as Weird Stuff in Sunnyvale, but it was still a fun trip. 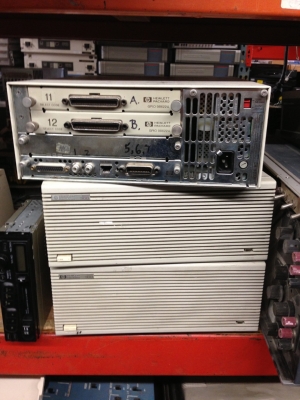 A stack of HP9000/300 computers Something that caught my eye while wandering around was a pile of HP 9000 computers. Back when I worked at Napa Valley College we had a rack mount HP 9000. It was old and slow, but it had a ton of serial ports that we used to hook to all the HP Terminals that were scattered around the entire science building. Because of how slow it was, and how brain damaged HP-UX was, it got named Grimlock.

I tried to convince myself that I didn't need an HP 9000 since it wasn't really that interesting, but nostalgia won out and I ended up buying it. I also found a 9153B 20MB hard drive that I bought too.

Once I got it home I did some searching to see what it was I had just purchased. I wasn't sure how I was going to do anything with it since I don't have a copy of HP-UX and I likely didn't have a hard drive to hook to it anyway.

I found some information though that NetBSD had been ported to the series 300, and it even appeared that the current version might run. There was also information about switching the computer to use a serial console which was great since I don't have a Sync-on-Green monitor or an HP-HIL keyboard.

After I got the serial console working I hooked up the 9153B disk, and it did actually see it and try to boot from it. But it sounded awful and it came back with a read error.

I read over the diskless/netboot guide for NetBSD and it didn't seem too bad.

NetBSD 6.1 wouldn't boot though. Looking at the date on the guide, it turns out it was really old. I hunted down a copy of NetBSD 1.4.3 and followed the guide, and I almost had it working. I had to add an alias to my Linux box because after the kernel boots, it sends out another broadcast to find the bootparam server again. For some reason it sends it out on the broadcast address of the class size, not the netmask size. Once I added the alias, it worked!