I often get asked by people how they can browse the internet on their TV. When I ask why they would want to do such a thing, they have this idea that it would be neat to be able to watch TV *and* browse the internet at the same time. I've been telling them they should get an iPad or Android tablet instead, because it had to be better than trying to browse the web on a TV. Of course the reason they want to do it on the TV was because they didn't want to spend much money.

Since I was also thinking it would be nice to have a tablet to sit outside with and read and watch the occasional web video, I decided to take the plunge and find out what the cheapest Android table I could find was like. I only had two requirements: I wanted to find the cheapest tablet I could, and it had to have a capacitive touch screen and not a resistive one.

I ordered two tablets with two different company names, for under $60 US each. The tablets may have different names, but the hardware was essentially identical. The only real differences were in button locations and case design. Both tablets were 7" capacitive touch screens, 512 megs of RAM, and a Micro SD slot. Both use the same Rockchip processor and Mali GPU, and both came with Android 4.1 Jelly Bean.

Not what I was expecting

My previous experience with Android left a lot to be desired, so I wasn't expecting much from these cheap tablets. The last time I tried an Android device, my iPhone 3G was far superior. 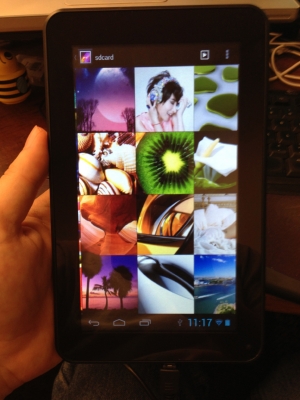 First thing I noticed was pixels aren't square. Most people probably won't notice this (check how many messed up videos are on YouTube), but I first noticed it just with text. Looking at pictures and video causes everything to be squished or stretched, depending on which way you have the screen turned. I would be nice if when displaying video the apps would compensate for this, since the tablet is able to actually report that the pixels aren't square.

Browsing the internet was nothing like my iPhone 3G. I could actually bring up the web browser, load pages, and not spend minutes waiting for things to render. Pinching and pulling to zoom doesn't let you slide around simultaneously, but it was responsive.

They are definitely a little underpowered. Sometimes it seems like the touch screen isn't working but that actually seems to be caused by something that is hogging the CPU. When it's busy and you try to pop up the notifications or move the insertion point, it completely ignores you. However if you're typing and you're not seeing a response, you can keep typing and eventually it catches up.

I was also able to install Netflix, which was not something I had even considered wanting to do. In fact Youtube and Netflix play better on the tablet than they do on my 2007 MacBook!

It's a software problem

Software is where the biggest problems are. On these cheap tablets the manufacturer often doesn't want to pay to license the Google apps. Google Play store is not on the 2nd tablet, which makes no sense. Why does Google not want to have their store on everything and make money? You have to find your own store which is a pain, and to use it you have to allow installing untrusted apps. This then raises the question of how do you know you're getting the real app or something that someone cloned to steal all your info? 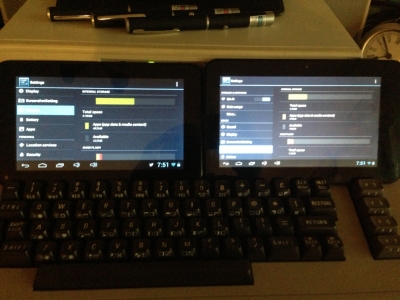 Same resolution but configured for different pixel density Getting apps on the tablet without the Google Play store is a hassle. There are a couple of 3rd party app stores pre-installed, but they don't work well. There seems to be a lot of stuff that goes along with the official Google stuff, so even if you manage to get Google+ installed, it doesn't work and keeps crashing. While tinkering trying to see if I could get the Google Play store installed, it did something that got the Google+ app working, but the Play store still crashes.

Chrome is too much of a pig. It is pretty much unusable and reminds me of the iPhone 3G. Don't even bother to install it. Also if you use the Google search app (which is separate from the browser), don't turn on Google Now. The Google Now will bring the app to a crawl and make it useless.

Is it worth it?

What you get for the price though is simply amazing. If you were to compare to some kind of kids' computer you could get at the toy store for the same amount of money, these tablets just blow it away. You can't even get a handheld game console with a screen this big for that price!

I have to say that I'm really pleased with what they can do. They are far more useful than I expected. Finding new uses for them during the last few weeks has not been a problem. At work I find myself using one as an easily portable screen to share pictures and videos. I also have been bringing one to meetings so I can multitask, like ssh into a server and fix things.

While my original expectations were very low, these super cheap Android tablets far exceeded them. There's no doubt that I will be able to do everything I wanted with one of these tablets, and much more.

I kept digging into how to get the Google apps onto the Proscan. 99% of the instructions out there tell you how to do it on major brands. The Proscan tablet is a no-name and is "not supported" by all the custom stuff so all the instructions I found didn't work.
I found these instructions on rooting and installing CWM which worked great, so I now have GApps. Goodbye unknown sources! Next thing is to see if maybe there's a way to put on a custom ROM...

How are they with music? Sound quality? Accessing music on microSD...

The sound quality seemed fine with headphones. The ONN tablet didn't like a pair of iPhone earbuds, it seemed to have the ground connected to the mic and made everything sound strange. Using a pair of normal 3 pin headphones worked fine, and the Proscan tablet was fine with both regular headphones and iPhone earbuds.

So looking at these again I question if it's worth saving the $40 to get one of these instead of a refurbished Kindle fire for $100.

This isn't a matter of Google not wanting their store on the device. Android is open source, and there is nothing to prevent anyone from cloning the source, building it for their target, and putting it on their device. In order for a manufacturer to get all the Google apps and Play services, they must pass a the Compatibility Test Suite. With these later versions of Android, the CTS is more strict and cheap manufacturers don't want to go through the effort or hassle. Not to mention that many of these cheap devices won't be up to par.

I was able to play it.

Is there any way too root without a computer. Like framaroot didnt work. Poot work.