It's not stupid, it's enhanced!

Last year I was messing with an Apple IIe from early 1984. It was one of the oldest and didn't have the 65C02 processor and BASIC commands had to be typed in uppercase. A few programs like ProTERM wouldn't run because of the age of the computer. Since the only thing needed to enhance it was a 65C02 and a few EPROMs I already had on hand, I thought why not. After putting in the 65C02 things stopped because I didn't want to fight with my EPROM burner. 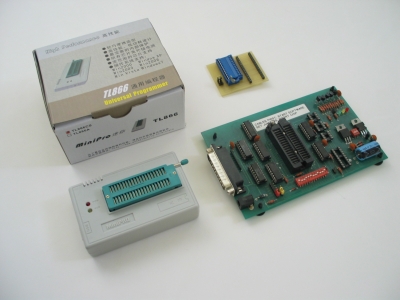 MiniPro TL866 on the left, old Willem on the right When I first got into doing arcade repair I needed an EPROM burner. At the time there wasn't much that was cheap. There was something known as a Willem programmer which connected to a parallel port and could burn a lot of different cheaps. After doing some searching around I ended up with one for about $100, with a little adapter to let it do 2732 and 2716 EPROMs.

It worked for most things, but not very well. It required running Windows 95 or 98 because the software couldn't work with the NT or 2000 drivers that talk to the parallel port. I ended up keeping around an old Stinkpad with Win98 just to use the Willem. When trying to burn 2732 and 2716 it needed a higher voltage and it almost always failed.

I kept thinking I should ask on an electronics group what the state of the art was in cheap EPROM burners. Out of the blue a tweet from Dave Jones of eevblog reviewed a USB programmer from China. The price of it was half what I had spent on the Willem a decade ago, it connected with USB, and it even doesn't use an external power supply but can do chips that need up to 21 volts! I asked if it supported 2732 and 2764 EPROMs and he said it did so I got the same MiniPro TL866CS with the extras. 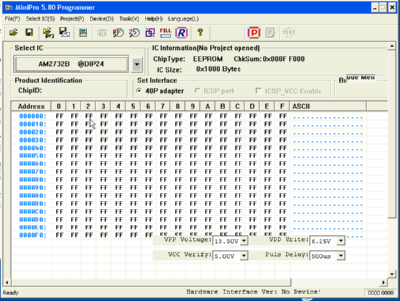 The voltage options can't be clicked It had no problem burning the 2764 EPROMs, however the 2732 was a bit fussy. I ran into two problems with the 2732. The first was that the chinese software kept freaking out on my computer, loading itself in a small window, and then moving the IC configuration options up into the hex/data area. With the options moved it was impossible to change them, and I need to set the voltage to the max. Other people have said they have a similar problem, and there doesn't seem to be any correlation to the OS or video card. I don't know if it hated my video card or XP or what. 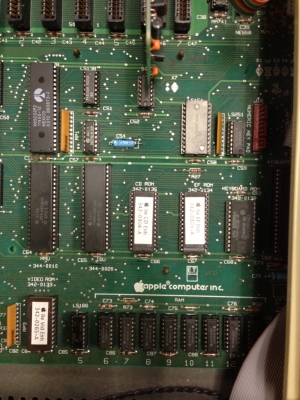 65C02 and EPROMs installed. I moved the burner to the computer in my entertainment center running Windows 7 and it worked fine there. I was able to set the voltage to 21V and try burning a 2732. The first one I tried kept stopping every 2-3 bytes and telling me it wasn't able to burn. If I clicked it and made it try again it would get a little further each time. But doing a 1k ROM 2-3 bytes at a time was going to take forever. I grabbed another 2732 and it worked better, it would do 100 bytes at a time. After several tries I was able to get the second 2732 to burn and verify successfully. I think the 2732s really want 25V, but it worked and I was happy. 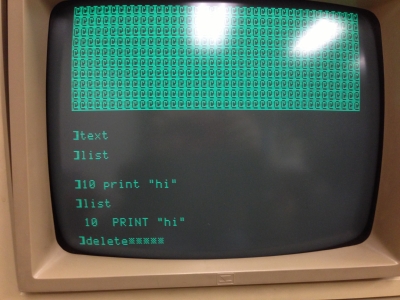 Lowercase BASIC commands! I popped out the ROMs from the IIe and put in the new ones I had burned and it works great! My IIe is now enhanced! Now I can type BASIC commands in lowercase. The delete key still sends a checkerboard, apparently that wasn't fixed until the platinum IIe. I also have mousetext now so I can get the nice text GUI in ProTERM. These upgrades should definitely help for #RetroComputerWeek.

Did you by chance use "It's not stupid, It's enhanced!" as reference to GiR ??... Invader ZIM moment?

Chris, the Apple IIE accepted BASIC stuff in lower case or upper case. It promptly translated them into Upper Case upon storing them in memory. That way any program stored on disk would be usable with a 2Plus. I owned one once.....

Nope, that's how the later ROMs worked, not the originals. The original IIe ROMs didn't understand the lowercase commands. I know because I have the IIe to prove it. ;-)

The data sheets for almost all of my 2732s specify 25V, including the ones I used here. I was amazed I was able to get away with 21V.