I was getting ready to do an experiment with the Raspberry Pi and see if I could get it to work with a USB device. I expected that the USB device would probably want a lot of power so I dug out a powered USB 2.0 hub. As I was hooking up the USB hub I was suddenly startled to see the Pi power up! 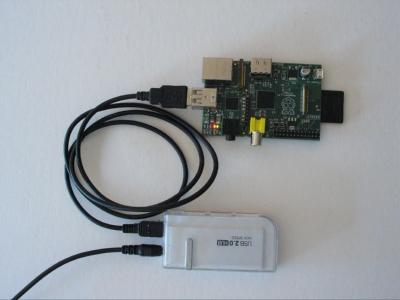 I checked to make sure I hadn't accidentally bumped my power supply and turned it on. The power supply was still off, the power was coming from the USB hub! This seemed really strange to me because the only port I had connected to the hub was the uplink port. I wasn't doing the well-known trick of hooking the Pi's microUSB power input into a second port on the hub. The only port connected was the single uplink.

I hooked the Pi up to another powered USB hub and it worked as expected, it didn't power up the Pi. Apparently the cheap USB hub is missing a diode on the uplink port, causing the power to travel back down and power up the Pi.

Powering the Pi this way provided enough power for the HDMI and composite ports to work because I was able to see that the Pi was booted up. There was not enough power however to bring up the network or even the keyboard. I also tried running the keyboard through the hub and it didn't work. Possibly there might be enough power to do something with the GPIO or sound, but I sort of doubt it.

While powering the Pi this way is interesting, it doesn't seem very useful. It's also annoying too because I have to boot the Pi up first before plugging in the hub.

Mine has done the same thing, I don;t know if there is enough power to run the hdmi + ethernet, But I have Ethernet working and it runs absolutely fine as a Web/SMB/DLNA server, and also downloads tv shows/movies from the net without any issues.(It has been running like this for 6 months now)

Just a quick note, I did the same thing by accident - however my powered hub is running a fully functioning RPi, bluetooth (on the hub), wireless (on the hub) a keyboard and a webcam - with no issues except the odd freeze on reboot.

Occasionally the wireless drops out, for a couple of seconds.