Extracting Blood from a Stone

Last week after a meeting in Sunnyvale I took a trip over to WeirdStuff Warehouse. This place is great, they have all kinds of obsolete things to ogle, make fun of, and buy for cheap. One of the things they had was an old HP DesignJet 488CA that takes E size 36" wide paper, with the bonus roll feeder, cart, and paper catcher. They let me plug it in to see that it at least powers up and I bought it and took it home, hoping I could get it up and running. 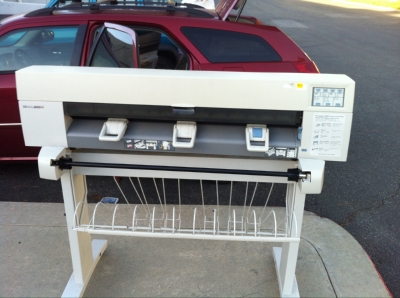 At WeirdStuff I also bought some unopened ink on the off chance that it might fit the printer even though the model numbers weren't exactly identical. No such luck, HP stuck tabs on them to prevent you from inserting them, and if you break off the tabs and do it anyway, there's an IC in the cartridge that tells the printer to refuse to use the ink. The cartridiges I bought were 51640C, 51640Y, and 51640M, and the printer wants 51644. I also have a non-working DesignJet 250C which uses 51650 cartridges of the same form factor. Interestingly, the 51640A black cartridge is the same on all the models. (If HP is still making the cartridges for these printers, I'll bet they're kicking themselves now because they have to manufacture and stock several slightly different "obsolete" ink cartridges instead of just making one.)

I went on eBay and purchased some never opened color cartridges, but most sellers on eBay are incredibly lazy, unprofessional, and slow, and it was likely that it would be many weeks before I see the cartridges I bought. I decided to see if there was some way I could revive the blue cartridge. I gave it a soak in windex and I was able to get a couple more nozzles working. Additional soaking however didn't yield much more. Using the built-in priming pump on the printer didn't help much either.

The internet suggested trying warm isopropyl alcohol or steam so I took the blue cartridge home and tried both. There was a slight improvement but not that much. More searching of the internet suggested using ultrasonic cleaners. I had completely forgotten that I had bought one from Harbor Freight years ago intending to use it to repair an Epson inkjet I had. I never did repair the Epson because tearing apart the printer to pull out the head was just too much trouble and I knew that even if I got it working again it would end up sitting idle and drying up, requiring me to tear the entire thing apart again.

I gave the ultrasonic cleaner a try on the HP cartridge and got even more nozzles working, but more cycles in the cleaner still weren't making much improvement. Another suggestion was to try a vacuum or a centrifuge. To use a vacuum I needed a way to seal the end of the hose onto the cartridge. 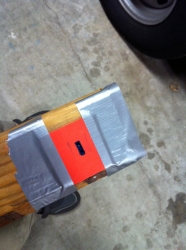 Vacuum adapter to clean cartridge I built an adapter using a block of wood and a piece of soft flexible craft foam I got at the dollar store. I drilled a 1.25-inch hole most of the way through the block, and then drilled three 0.125-inch holes grouped in a line all the way through. I cut a slot in the foam and taped it over the block of wood.

I shoved the vacuum in the large hole and turned it on, then pressed the inkjet cartridge against the foam. I could tell I got a good seal because the vacuum hose started to collapse and after I stopped there was blue ink all over the foam gasket! The vacuum trick was a pretty big improvement, but still not enough. More soaking, cycles in the ultrasonic cleaner, and vacuum was still not making enough of an improvement. Time for the centrifuge!

Cobbling together a centrifuge was pretty easy. I grabbed a narrow piece of plywood from the scrap pile, tacked a couple of stops on the ends, and drilled a hole through the center and inserted a bolt. 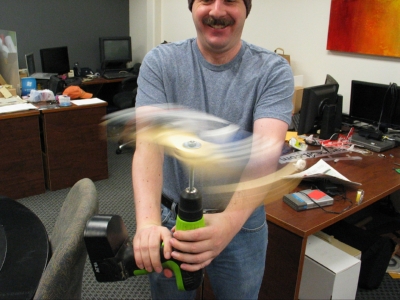 Spinning the cartridge in my To spin it I just chucked the bolt up in a drill and pulled the trigger. I put the cartridge in a ziplock bag and rubberbanded it to one end of the centrifuge. On the other end I rubberbanded on a pill bottle filled with arcade tokens to act as a counter balance. 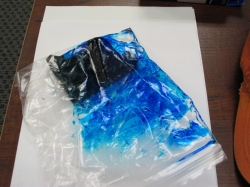 What a mess! After a few quick spins the inside of the ziplock bag was filled with blue ink. It made quite a mess, but it also made a major improvement in the cartridge. It was almost entirely working!

More trips through the ultrasonic and the centrifuge had it nearly working. 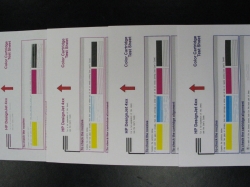 From where it started to almost working But this is where the story turns sad. Suddenly the cartridge stopped working entirely. Blotting the end is no longer drawing out any ink at all, it seems as if the cartridge somehow dried up. The gauge on the side still shows it as full, and weighing it shows that it still has quite a bit of ink in it. All I can figure is that the centrifuge was a little too hard on it and it broke the liner inside and now there's no pressure to push the ink out of the head.

Now my hands are covered in blue ink and all I can do is wait for my eBay purchase to arrive.

Update: Apparently the eBay seller decided my winning bid wasn't profitable enough so he only sent me one of the 3 cartridges from the CMY set in his auction. Fortunately it is the cyan/blue one I need most, but I have a complaint in to eBay right now.

I ordered several cartridges for my DesignJet 220 off of Ebay. What I found is that a lot of the cartridges sold have an expired date on them. Even though they were still sealed in the original bag, the ink had dried up inside and had deteriorated the flexible circuit on the back. I had no problems getting a refund, but never could get any working cartridges. Good luck though.

I've been getting them from eBay too and haven't had a problem with cartridges that are only a few years expired. It's the ones that are 10 years old that have a big dried up clump of ink in them.

I say you make your own bulk ink-feed system for it!