Overview of my HTPC setup

This is just a quick overview of how I setup my current HTPC. The computer is an older M2A-VM motherboard with an Athlon 64 X2 5000+. The onboard Radeon 1250 video wasn't quite good enough so I added a GT210 video card that I got at Fry's for $35. The GT210 uses HDMI to connect to the TV at 1080p and also carries audio. The TV has an optical out which relays all the audio from the computer to my receiver.

The computer is running Windows 7 so that I can have Netflix with a 10 foot interface. At first I had WMC rigged to run XBMC, and while it worked, there were issues with WMC not making itself front after XBMC exited and I had to click it with the mouse to get it to accept remote commands again.

What I'm doing now is I have XBMC launch Netflix. After some googling I found a forum post with a script to launch WMC from XBMC and tells WMC to go straight into Netflix. The link to the script from the forum is no longer good, but you can download the snetflix_v9b.zip from here.

For remote control I'm using Flirc and a URC WR7. I chose the WR7 because the button arrangement of the d-pad and play/stop/start closely matches the TiVo peanut style remote.

By default XBMC understands the WMC keys, so I opted to map the remote to send WMC keys. This lets me use the remote both in Netflix and XBMC without having to switch modes on the remote. I did make a small addition to my personal XBMC keymap/keyboard.xml to remap Ctrl-Shift-M to PreviousMenu. I have ESC setup to drop out of Netflix/WMC and back into XBMC which is why it is mapped to one of the bottom buttons on the remote.

DVD playback is also under WMC. I tried it under XBMC at first but it had problems with dropping frames and jerky playback. I'm not sure why since WMC can play DVDs just fine and the computer and graphics card is more than powerful enough to play H.264 1080p video. 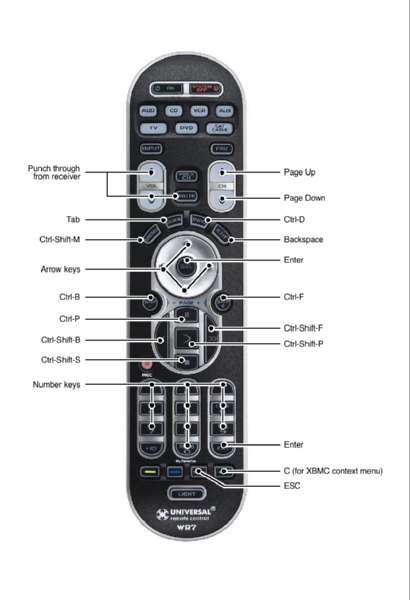 Map of which keystrokes are assigned to which buttons