Netflix, are you trying to get me to unsubscribe?

I'm now on my 3rd device for Netflix. It's so close to working, but it's seriously flawed.

The first device I tried Netflix on was my TiVo HD. It worked well enough that I could try out streaming, but it is ancient, it will never be updated, and just barely works. In fact, there were problems with it screwing up the aspect ratio quite often, so within a week or so of signing up for Netflix, I was searching for a better interface.

Right after I signed up for Netflix was when they finally got their software in the Wii store. I downloaded it and tried it out, and it was definitely better than what is on my TiVo. It had problems too, but was much more usable than what I had before. It was better at understanding when to put in black bars so that things didn't get stretched, and it had an incredibly useful feature: it remembered which episodes you had seen.

They updated the Wii software a few times, and they had to change things around just because they could. Sometimes I wonder if they are competing with Facebook to see who can change more stuff without actually checking if it's a good idea. I would get used to the new Wii software, and make do. Their current version now plays a show immediately without even giving you a chance to read info about it or select a specific episode first. I don't understand this change because it means they are wasting bandwidth playing something before someone can really choose what they want to watch. It just makes no sense.

Unfortunately in their last update they messed up the Wii software so much that it often crashes in the middle of playing. And when it crashes it crashes hard. The picture freezes and whatever was the last sound it was playing comes blasting out of your speakers in a loud buzzing tone. It locks up the Wii so hard that you have to either pull the plug or hold down the power button. And it will do this 3 or 4 times in a row. At random. It's not always the same section of video that crashes it.

Once again I needed to go find a new device to try Netflix on.

This time I decided to try out Windows Media Center because it has Netflix in it. When I fired up the interface for the first time it seemed very nice! It was easy to navigate, it would even let me see what's in my DVD queue (although I can't add anything). I hooked up the computer to my TV to really try it out.

While it seems very polished, it has a major flaw making it useless for watching any kind of series with lots of episodes. Unlike the Wii version it doesn't remember which episode you watched last. When you go into a series and hit the play button, it just picks a random episode and starts playing it. It won't even let you know which episode it is. If you watch that entire episode and hit play again, it picks the exact same episode. Over and over! Once it has decided on a random episode it will never pick another. 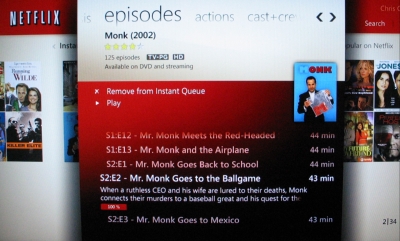 Just jump to the next unwatched episode! The only way to get to the next episode is to go over to the episode list and arrow down one at a time until you get to it. Fortunately it at least shows you a progress meter of each episode, so you don't have to guess like you do on the TiVo. But once you're a couple seasons in, it takes forever to get down there. And for whatever reason, holding down the key goes slower than repeatedly hitting the key as fast as you can.

It's almost as if no-one at Netflix is actually using their own product.

As part of testing out Windows Media Center with Netflix I also installed XBMC. It's got some improvements over the MythTV I've been using, one of which is being able to keep track of which episodes I've seen and being able to jump to the next unwatched episode. I've been sticking with Netflix because of the convenience factor, but since I'm starting to become frustrated with them, I'm now wondering if there's any reason to continue subscribing.

Netflix, why does your software have to suck on everything?