I always enjoy shopping at the dollar store, you never know what kind of neat things you're going to find. Today I found this 12V to USB adapter! For a buck I had to get it and see if it would really work.

It has two USB ports but they aren't wired up identically. The 'A' port can provide up to 1 amp while the 'B' port is only 0.5 amps. 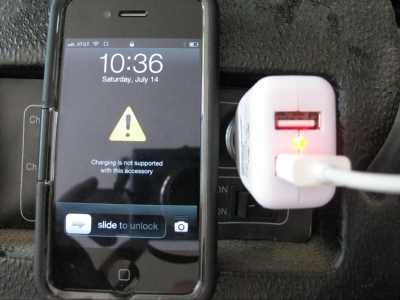 Not iPhone compatible Unfortunately neither port works with an iPhone. The iPhone doesn't see the 'B' port at all and refuses to work with the 'A' port.

Taking it apart was pretty easy, the white cap on the end unscrews and then the two halves of the housing just pop apart. The chip used for the DC-DC conversion is an MC34063A. The 'A' port has one of the data pins connected while the 'B' port has neither data pin connected to anything. There's an LED which lights up to indicate that it's receiving 12 volts.

Since the 'B' port has both data pins unused I could probably easily add some resistors to the 'B' port to convince the iPhone to charge from it. Something similar could probably be done to the 'A' port but it might be a little trickier just because the pins are inserted into the circuit board.

Even though it doesn't work out of the box with the iPhone there's still a lot of neat little components there that makes me feel it was worth a buck. I picked up a few because who knows what hacking project these might come in handy for!

For android phones, A & B unconnected is a USB "slow" charge, A joined to B gives a so called AC "fast"charge. I think USB is 100mA or 500mA if the USB master talks back and allows it. AC is from 700mA to 2A depending on phone. The fast charge is stepped up in current several times, and the voltage sag monitored. The stiffer the supply, the faster the charge. Non-genuine USB-microUSB leads have enough resistance to reduce max charge current.