The other day I was thinking about making a wooden case to store my Atari 2600 and all the accessories in. I don't know if I will actually do it, but right now it is packed in a cardboard box and a couple of shopping bags and it's kind of a mess. Besides trying to figure out how I would organize it best, I was thinking that on the outside of the case it would be neat to carve a design into it that would represent what was inside. My thought was that I should carve a representation of a game that makes you think "Atari 2600."

My top three Atari 2600 games would be Combat, Adventure, and Superman. However if you asked someone what platform those games were for, they probably wouldn't know. I thought about it some more trying to figure out what game for the Atari 2600 is going to be the most recognized. One that there would be no doubt that it was for the Atari 2600 no matter which generation of gamer you ask. And then it hit me: Pitfall! † 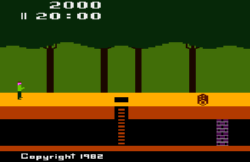 It's kind of funny because Pitfall wasn't even produced by Atari, it was produced by Activision, the first third-party developer of software for the 2600. But if you say "Pitfall" everyone is going to instantly think of that wood grained Atari console and those black joysticks.

After figuring out something for the 2600, the next question was what would be the quintessential NES game? You're probably thinking Mario, however I think these days the Mario franchise has become too diluted. When you say Mario people are going to think about whatever Mario game they played recently, or whatever Mario game they had first. It doesn't really mean NES anymore. Blowing on the cartridges means NES for sure, but that's not a game. 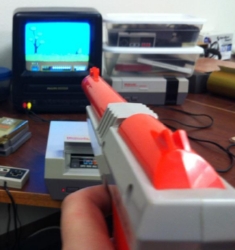 I think though if you say Duck Hunt, people immediately recognize that as NES. Everyone remembers that game, the gun, and having the dog make fun of them when they miss. Another possibility would be Contra, which also is the most familiar use of the Konami Code.

What about other platforms, like the Sega Master system, the Turbografx-16, the Nintendo 64, or the Dreamcast? What do you think is the quintessential game?

† Sadly, my collection includes neither Pitfall or Superman.