Thanks to a post on Reddit I found out about these Arduino compatible boards with built-in Ethernet. They are called the XBoard V2 and they are made by DFRobot. These boards are 5V based which in theory will make it easier to interface with them than a 3.3V based board. They are very tiny! I was expecting a board the same size as the original Arduino which is already pretty small. (The arcade tokens in the picture are just there for scale, they are the size of a US quarter, 24mm.)

I've been looking for an Arduino compatible board with built-in Ethernet that supports Power over Ethernet (PoE) for under $40 ever since my first few projects with an Arduino. I'm not sure yet if this board supports any kind of PoE. The original post on Reddit actually linked to a different board called the IBoard which claims to support PoE although I think it probably doesn't support 48V IEEE 802.3af and lets you jumper the unused pairs into the regulator. The IBoard is also 3.3V based so when I saw the comment about the XBoard and being 5V based I decided to give the XBoard a try.

The XBoard was $30 and came from DFRobot which is based in China. When I ordered they had a DHL option with tracking which was only $6 more than the standard slow boat method. I liked having a tracking number because usually when I order things from China you have no idea if it was shipped or when it will arrive. It was nice following the package and it got here in just 4 days! When it arrived it was very professionally packaged, again unexpected. Most of the things I get from China are just very cheaply packaged and jammed into a padded envelope for mailing.

Now I need to come up with some good projects to use these boards on! 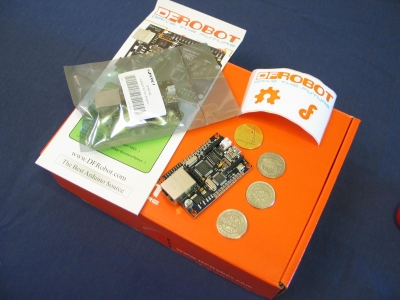 Did you ever use it ?

No sadly, I haven't done anything with them. I now have several Raspberry Pis and they are much more capable and I've been using them much more often for things.