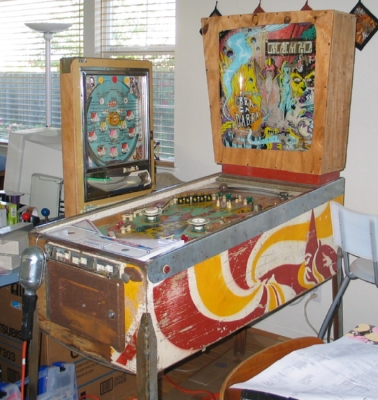 Progress of the restoration of a 1975 Gottlieb Abra Ca Dabra

I sold the machine. I decided that it was going to be way too much work and too expensive to ever make this thing look decent. After all was said and done though, I did manage to make $2 profit!

It's been a while since I worked on this! I kind of got sidetracked on other things (like fixing a display problem with Hot Shots and babysitting my parents' dogs for 2 weeks). Thanks to Michael Coates I now have a good idea of what the top plastic and the backglass should look like!

Yesterday I built a rock tumbler out of a bucket, an ice cream maker motor, and K'Nex. I'm using corn cob media that I picked up at the local Petco. Works great! The acorn on the right is the before, and the one on the left is the after! These results were achieved after 15 hours. Impressive! 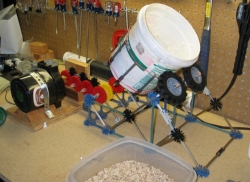 Rock tumbler made of K'Nex

Left acorn after tumbling, right is before 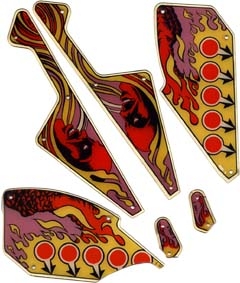 Scan of plastics At the moment I've decided to try to restore it. I'm working now on reproducing the plastics, since I'm missing a couple and 3 others are broken. I've slowly been rebuilding them in a CAD program, then moving them into Illustrator to redo the artwork. I'll probably print them out on transparent sticker stock on a color laser, but with them in Illustrator I could always do color seps and silkscreen them if I ever wanted to. Now if only I had a CNC machine to cut the plastics... I guess I'll have to do it by hand.

I now know there are two plastics missing from the top center. One with the artwork, one that sits under it to act as a ball guide. I found a decent picture of the ball guide part and was able to make a good enough replica in my CAD program. I printed it out on paper and installed it in the playfield and it fits perfectly. I still need a good scan of the top center plastic with artwork though. If you have one, email me.

I'm also not sure what I'm going to do about the backglass. If I can get a good 300dpi scan, I'll vectorize it and put it in Illustrator format. There's really not enough left of mine to make a good copy from. If anyone has a scan of this, let me know. Or if there's anyone nearby that might be willing to let me come over and scan it in at your house, that might work too.

Right now I'm not quite sure what to do with it. I started adding up all the things that need to be replaced because they are either damaged or missing, and the cost is probably more than what the machine would be worth. 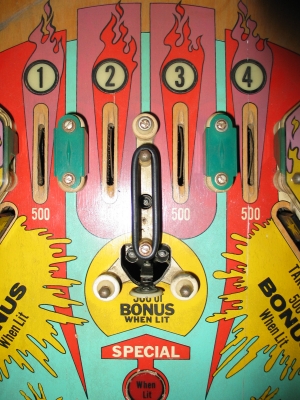 Upper playfield missing something Not sure what's supposed to go in here to keep the ball from falling into the light bulbs and getting stuck. The top plastic was missing and it came with that black rubber. I don't see how a rubber would go behind the lights to shield them.

I found the missing EOS switch! Someone attached it under the tilt ball track and was using it as a tilt switch. The original tilt switch is gone, but who cares right now. So what if I can cheat while I'm getting everything working.

I was able to play a game! Sort of. The ball count doesn't move since it needs new springs. The flippers work but don't have any power since I swapped in the wimpy ones that someone had put on the pop bumpers. Still a lot of issues with switches not making contact. But it plays!

I guess I'll turn this into a blog. I keep fiddling with the machine and might as well make notes of what I find.

Last night I found that someone had removed the flipper coils and replaced them with pop bumper coils. Neither now have an EOS switch connected, and the right flipper switch has been removed completely, so I have nothing to reconnect a correct coil to. I also found flipper coils on the pop bumpers, although their model numbers (Gottlieb A-17875) don't match what the manual says should be on the flippers. Hopefully all the coils still work and I can swap them. 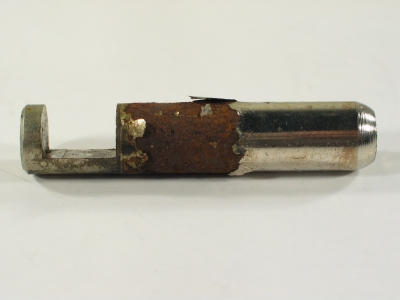 Piston so damaged the chrome came off While checking out the ball count unit (?) in the head, I found one of the plungers completely siezed. I went ahead and sanded it down smooth and put it back in since I figured I didn't really care if it ruined the sleeve anymore and I need something in the coil when it's charged.

Because I couldn't resist the challenge, I have started getting the game working again. Partly because I think it would be neat to see it work, and partly to see if it's worth reconditioning it to sell it or if it would be better to part it out. So far there's at least 2 parts that will have to be replaced to even be able to play a game, and I haven't priced them. I'm sure I'll find more parts as I continue to fiddle with it.

At this point I can get a game to start, but I still can't get the flippers to work. Seems to mostly be a lot of the switches are out of adjustment. Going through them one at a time to fix them is taking quite a while.

I saw an ad on Saturday morning July 3rd for a free pinball that "Lights up but isn't working." I was quick on the draw and told the guy I would take it. There were no pictures in the ad and I didn't ask about condition. Hey, it was free! What could be wrong with that? Patricia handled the arrangements of meeting the guy, and we set off to pick it up.

Well, we found out what could be wrong. This thing is in bad shape. We stood around for quite a while debating if we should take it or not. We were already there, so the gas was spent either way. I thought the playfield didn't look too bad and maybe there might be some other parts still good. Patricia said we could just leave it in the backyard for a while, since it's not going to rain and it's really not going to get any worse. So I loaded it up, hoping maybe I could find enough good parts in it to earn back the gas money.