Just received a pair of little wireless Bluetooth serial modules in the mail today. They came from Dealextreme and arrived in just under two weeks which is pretty fast for them. I saw them on reddit in /r/arduino and for under $9 I figured that was a pretty cheap option to tinker with wireless on the Arduino or Teensy. 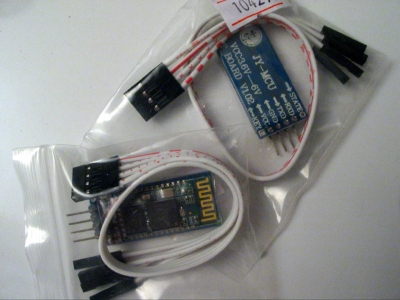 Bluetooth modules with cable They included a cable but to hook to an Arduino I'll need to replace the connectors on one end with something that has pins. To plug into a Teensy I can just add a male header to the Teensy. They also are wrapped in transparent shrink tubing. I guess they wanted to make it easy to throw them in something and not have to worry too much about it shorting out? The ends and the connector are still exposed though.

I'm not sure yet exactly how they work but it looks like they are pretty simple. Since they only will appear as a serial port to the computer they are paired with, I won't be able to use them to build my own Arduino based keyboard. One thing I did want to do though was get some wireless going with my LED sign so that I didn't have to have it sit right next to a computer.

i have this modules my self... haven't done anything with them as of now... did you ever get them working with your arduino?

Same as you, I haven't done a thing with them. They are still sitting in their package waiting for inspiration.