Sometimes it's handy to have a way to add coins by pressing a button, either because your game doesn't have a free play option or because when the game is put in free play it no longer goes into the attract mode. For MAME cabinets it's nice to have a way to get into the MAME menus, add coins, and exit the games.

Using the player 1 button as the shift button on an I-PAC can often be problematic because sometimes all the players panic to hit start to continue their game and 2 people often manage to hit them at the same time and exit the game. Sucks when you're on the almost last dungeon and you have to start over!

It's also nice to have the button hidden and have the mod be easily reversable so as not to deface an original cabinet. What I did was mount a switch behind the coin reject button. It's completely invisible and requires no drilling or changing how the coin door works. It does however require a coin mech to be installed. 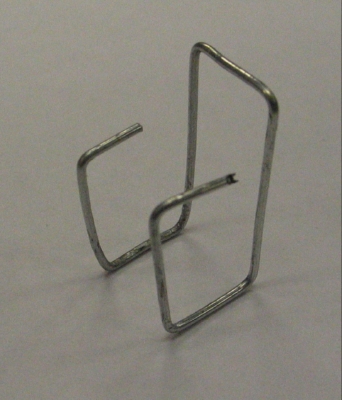 Paper clip bent to be 1 inch tall and half an inch wide The switch gets clipped to the coin chute with just a paper clip. By bending the paper clip into this shape which is about 1 inch tall at the back and half an inch wide, it holds the microswitch securely. I've tried using double-sided tape but the tape eventually gives out and the switch slips and stops working.

When connecting the switch, you wire into the NC or normally closed contacts. This is done because when the switch is mounted the reject lever on the coin mech keeps it pressed. Another advantage of setting it up this way you don't have to push the reject button very far to trigger the microswitch.

On my regular arcade cabinets the microswitch is wired in parallel with one of the coin switches and pressing the button adds coins. On my MAME cabinets the switch is connected to an unused input, in my case P1 button 8. I reprogram the I-PAC so that the shift function is now tied to that input, and remove any other key presses the input had. Now to use the shift function to add coins I hold down the coin reject and push the button on the control panel, to exit I hold the reject and push P2.