Thirty Years Ago I Became a Programmer

Thirty years ago I became a programmer. (My sister did too.) On Saturday, March 20, 1982 my parents bought an Apple II+. I remember spending a long time in the store dreaming about all the great programs I was going to write. Getting a computer was definitely one of those life changing events. Both my career and my favorite hobby revolves around programming computers.

Here's what my mom wrote in her journal that day:

We took the big step into Computerland today! After breakfast we drove to San Francisco arriving just after the store opened and bought the Apple II computer with a disk drive, game paddles, basic program disk, 3 games (Adventure, Stellar Invaders & Olympic Decathlon) and lots of software.

The salesman, Jeff, spent over an hour setting up our computer & showing us basic things. When we brought it home it was easy to hook it up to the TV and plug it in.

Then it was on most the rest of the day, on game mode nearly always.

After Kathy went to bed Robert read how to run simple programs as Chris punched them in.

It's really exciting to have the new computer—the possibilities loom on the horizon. Chris is very very excited about it. He's been so wound up & short tempered with everyone and of course Kathy and him have been fighting over it.

About a year after my parents bought the II+ my middle school started teaching computer classes. The principal had made the decision to fill a classroom with TRS-80s which I found to not be very interesting. The next day I brought in some software I had written and showed it to the instructor. She was impressed and for the rest of the semester I had a sort of independent study where I was free to write more advanced programs using one of the two Apples that weren't used by the rest of the students. At the end of a class one of my favorite things to do was load up one of my programs that was my own version of the BASIC interpreter. I would leave the computer powered on and walk away, and sometimes the next student would come in and sit down and start punching in a new program without rebooting the computer first. Of course when they typed LIST the computer would spit back "THERE ISN'T ANY!!"

For the past couple of months I have been on an archeological dig going through old 5.25" floppy disks trying to recover anything I can. I've managed to get back quite a lot, although a few files have been lost to old-age and neglect. The floppies weren't always stored in the best environment. Getting the floppies read and converted into disk images was made simple with ADT Pro. I was really impressed with how it could copy itself over to the Apple without needing anything to boot from or any communications software already on the Apple. CiderPress also made it easy to shuffle files around between disk images.

As with any archeological dig, you find a lot of stuff but it takes time to catalog and sort through. I've picked through a lot of floppies that had a lot of bizarre stuff on them, but what can you expect from an 11 year old and 6 year old? The most interesting thing I found was a couple of casino programs that my parents wrote which appear to be finished, but they never published. One is a poker program complete with title screen and intro music, and the other is a slot machine program with animated symbols on the reels.

I've put together a small sampling of the software we all wrote from back then. Modern computers are so powerful you can emulate the old Apple II right inside your browser (if you install the plugin). One disk has my programs; another has my sister's; my parent's casino programs are there (which I slapped on a title screen and menu to make them easy to run); and a bonus disk containing a program I wrote for my mom that she was afraid had been lost to the ravages of time, yet somehow I was able to recover it.

To get the emulated computer to accept keyboard input, be sure you click on the text inside the monitor. If you can't figure out what the programs do or how to work them make sure you have Caps Lock turned on. I also recommend typing LIST, especially on my sister's programs. They are... um... quite interesting! 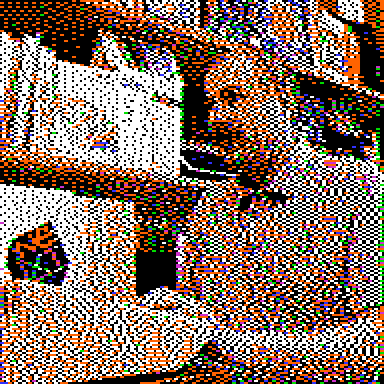 What I look like today, rendered as 6 color Apple II hi-res

This is all very remarkable! Good job. And to think you found the chicken program (that you had forgotten you had written) and, I remember, you actually did call it the Stupid Chicken Program. I didn't remember there was music on the program Dad wrote. Dad just found an old 5.25 inch floppy with your name on it. I wonder what is on IT?

I also remember writing some genealogy programs to import data for you, but I haven't run across any of those yet either.

I love your Mum's understated foresight; "It's really exciting to have the new computerâthe possibilities loom on the horizon."

My story is similar. I was working in a solenoid factory in 1979 as a technician and bar tending part time and one night my dad stopped at the bar and said he had something for me out in the car. Turned out to be a brand new TRS-80 Model I. Within a day I was hooked and was never without a computer since then. I have had just about every one on the market. I have been writing firmware and playing with hardware and electronics since then. What a blast it has been.