I've had a Rubik's cube floating around the office at Warm Floors since almost as long as I've worked there. It was given to me by the owner of the company after he picked it up at some computer show. It's a fairly standard cube except that it is covered in Microsoft ads. It's slightly harder to solve than a standard cube because you have to make sure the center tile is rotated the right way. The poor cube got trashed because the other people in the office got tired of me always solving it. It ended up covered in red stickers on every side for a while, and then when they tired of that they pulled all the red stickers off which took off several of the original Microsoft stickers too. Over the weekend I decided it was time to do something new with the cube, so I made new stickers with employee faces on it. I also threw in a Santa face since it happens to be Christmas time and they had just put up decorations at Warm Floors. 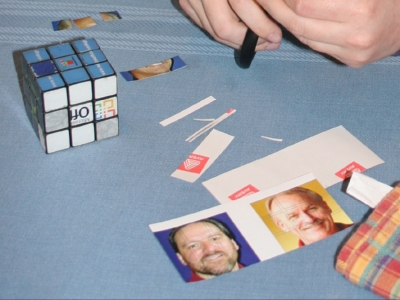 It's even harder to solve now, since once the faces are all mixed up it's hard to tell which piece goes with which person. But it's not impossible. I found solving the Santa side first was easiest since once he's done the rest pretty much fall into place. 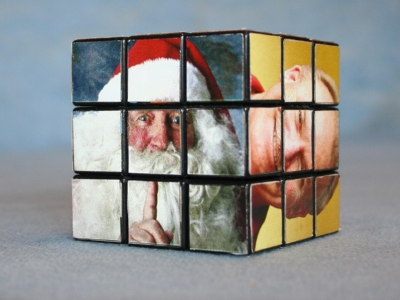 I think it turned out really cool, and if it wasn't so much work cutting out all the stickers, it would be neat to make lots of them with different pictures for stocking stuffers.