The electronic ignition worked better than I expected. I was sure some of the fireworks weren't going to go off because the nichrome might have come disconnected from the wires since it seemed like a very fragile setup. But every item lit. It was very cool to be able to push a button and set things off, in some cases several things at once. 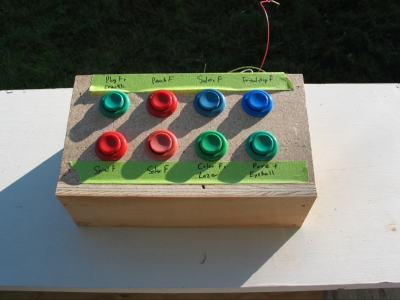 Control panel made from arcade buttons It was also cool to light things in rapid succession, no running over to put another item down and fumbling to try to light it.

I zip-tied about 16 or so things to a board. The large fountains were wired independently to a single button, the smaller fountains and filler items were wired together in groups of 3 or 4 to a button. 8 buttons didn't actually go very far! When I started grabbing things off the pile I thought I didn't have enough. But when I sat down to decide what should go to what button, I found I had way too many things and had to put some back.

While the whole thing was certainly cool, wiring up just the few items I did took over 2 hours. Threading the nichrome and then cutting the wires and getting everything hooked up was very tedious. Maybe next year I can get some volunteers to come up a day or two before and help wire things up.

One thing I can see having a computer involved might be helpful for is keeping track of what to push to light what, as well as giving approximations of when things are going to burn out so that the next thing can be lit almost seamlessly. Of course to do that I'd have to somehow know the duration of random items, and I don't know how I'd determine that other than buying two of everything and lighting off a bunch just to see how long they last. Maybe after years of doing it I could build a database, but I'm not sure I'd get the exact same items every year.

There is definitely a lot of potential here though.