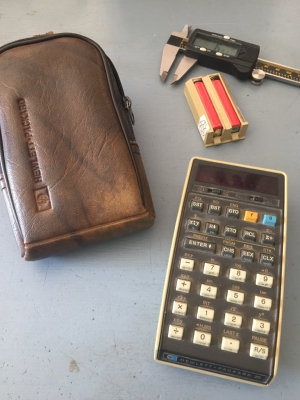 I’ve had my dad’s first calculator sitting in a drawer in my desk for a little while. It’s a Hewlett-Packard 25 calculator with a red LED screen. My dad got it in February of 1976 at Macy’s and paid $207.68 for it. The calculator itself has a manufacture date of March of 1975. Not long after he got the calculator HP introduced the 25C which would save your program even after switching the calculator off which he said he would have preferred, but back then returning things to a store was a major hassle.

My dad used the HP 25 for twenty years. Even after the battery wouldn’t hold a charge he was still able to keep using it by keeping it plugged into the AC adapter. Eventually though the battery became so corroded that it wouldn’t even make contact with the terminals and without the battery in place the charger won’t work.

The battery pack that HP designed uses rechargeable NiCad batteries in a sealed plastic shell. Some people try cracking apart the shell to replace the batteries but it doesn’t work very well because it breaks the plastic and won’t hold the batteries in very well.

Feeling like my 3D printer had been under utilized lately since about all I had been doing was printing silly toys I found on Thingiverse, I pulled out my dad’s calculator and set to work designing a new battery holder that would let me easily replace the batteries.

To start I took a few basic measurements of the original battery holder and made only the base and printed it. No reason to design the entire thing until I made sure the dimensions were right, and with such a small model the print time would be pretty fast too. 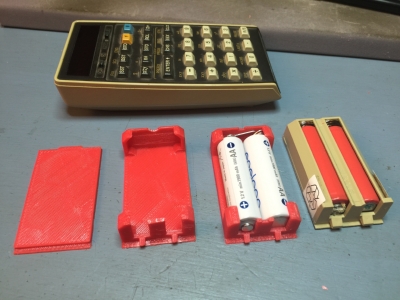 The base fit perfectly so I proceeded to design the rest of the battery holder. I added sides and ends just large enough to hold the batteries, along with the little clips to keep the battery holder in place. Unfortunately it didn’t fit! I hadn’t bothered to measure the height of the entire case thinking that the batteries would simply sit on top of the base. I had to redesign everything to recess the batteries slightly into the base.

I made a few more refinements, including a place for your finger to grab to help pull the battery holder back out of the calculator. For a spring I just used a bent paperclip.

It took a few iterations to get it right, but I’m quite happy with it now.

Dad was a high mucky-muck at HP bak in the day. He got every hand held issued to him with his nameplate on it by the factory. We'd beat the life outta them. There was always a variety of calculators in his desk drawer. Never thought we'd ever run out back then. Now they are all gone and I really miss them! Pretty cool seeing how you got that old HP25 running again.

How can I order one of these?

This is great! I also own a HP 25 and I would need to exchange the batteries. For how much would you print such a new holder?

Hi. I have an HP25 as well. Missing battery pack all together. Would you make one for me?